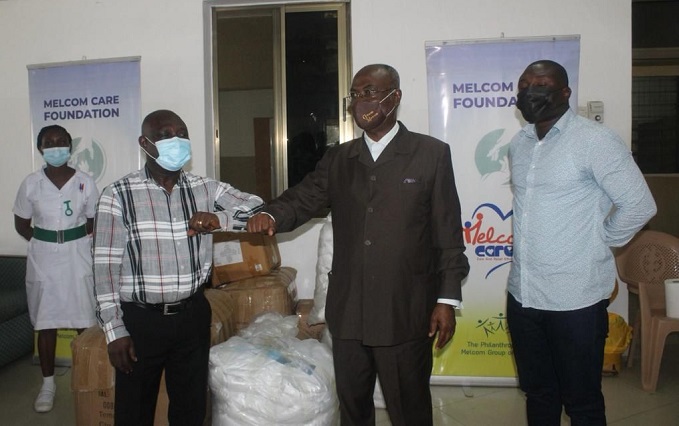 Mr. Godwin Avenorgbo (second right) with Mr. Emmanuel Aforbu in a symbolic handing over of the items

Melcom Ghana, through its charity arm, Melcom Care Foundation, has supported two health facilities in the Volta Region with essential items for the effective delivery of healthcare.

The foundation donated a set of 50 bed sheets, and pillows each to the Keta Government Hospital and the Anloga Clinic which were in dire need of the items.

The donation was in response to an appeal by the International Peace Ambassador and President of Project Volta, Togbui Goba-Tenge Seddoh, to the Foundation for support.

Director of Communications, Melcom Group, Godwin Avenorgbo, led a team to the Keta Government Hospital to make the donation on behalf of the Foundation. The team first called on the Awomefia of Anlo, Togbe Sri III to seek his consent and blessing for the ceremony.

Speaking during the ceremony, Mr. Avenorgbo said the appeal which was accompanied by graphic evidence showed the neglected state of the facilities at the two healthcare centres and added, “Melcom management was shocked to see the deplorable state of the super structure and immediately gave the go ahead for the request to be fully met.”

He said Melcom Care Foundation has chosen the areas of education and health as the focus of its corporate social initiatives because they directly or indirectly affect everyone.

He further gave the assurance that the Foundation will continue to respond to the call for support in these areas to make life more convenient for those who need support no matter where they live in the country.

Touching on the new developments at Melcom, Mr. Avenorgbo said the retail shop is adding on to its services and increasing its number of shops to cut down travel time for customers.

He said Melcom has started operating community-based quick shopping access points designated as Melcom Mini; the first of which has opened at Evita Building at East Legon, Accra.

Head of Administration, Keta Government Hospital, Emmanuel Aforbu, expressed his appreciation to Melcom Care Foundation for the swift response to their plea. He said the hospital needed a significant number of consumables including bed sheets and pillows.

“These items have come to meet an urgent need for healthcare in the hospital,” he said.

Togbui Goba-Tenge Seddoh who witnessed the donation expressed delight at the gesture by Melcom Care Foundation saying, “I am overjoyed to see this happening.”