A former gay, Aaron Adjetey Akrong, has cautioned Parliament to not legalize Lesbians, Gays, Bisexuals, Transgender, Queer and Intersex (LGBTQI+) activities in Ghana, as doing so would mean passing a death sentence on persons involved in the act.

The repented gay, now a pastor, said being an LGBTQI+ member or gay, in his case, comes with so many serious negative implications on one’s physical, psychological and emotional health which makes life uncomfortable for them.

He made these pleas at press conference organized by Advocates for Christ – Ghana (A4CG), an interdenominational civil society group, on Friday in Accra where he also revealed that about 90% of LGBTQI+ members are HIV positive. 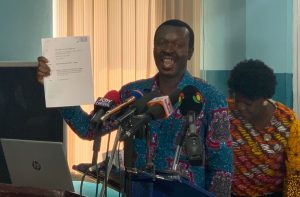 Board Chair for A4CG, Edem Senanu displaying a copy of the memo to journalists.

The conference, held under the theme: “The Devastating Medical, Genetic & Psychological Impact of LGBTQIA+ Practices”, aimed at sharing exclusive insights on the LGBTQIA+ phenomenon while educating the public on the negative impacts LGBTQIA+ activities on the nation.

It also sought to advocate for and promote the Proper Human Sexual Rights and Ghanaian Family Values Bill, 2021 which is before Parliament awaiting discussions on the floor.

Scientific Facts
Mr. Senanu iterated that contrary to claims by LGBTQI+ advocates, there are no scientific or genetic basis for same sex activities especially as sex is binary and scientifically assigned at birth, saying “sex is not determined by how people feel or think, later in life”.

He disclosed that a 2019 study of 500 million people across the globe indicated that there is no evidence that there are gay genes or a unique brain structure or some functions that primarily influence one’s sexuality.

“No one is born gay as the LGBTQI community would have us believe. It is a choice an individual makes and there is therefore no basis to claim unique gay or sexual orientation rights”, he said.

He indicated that the over 46 terms that describe sexual lifestyles or orientations in a number of countries at the moment, are ideologies or concepts people have come up with and they lack any scientific basis.

These, he added, are not known to nor recognized by most societies globally, such that they should be demanded or accorded the status of fundamental or inalienable ‘human rights’.

Mr. Senanu noted that there is a wide gamut of scientifically documented serious negative medical complications that arise from the alternate sexual lifestyles that members of the LGBTTQI+ community (other than that between a man and a woman) want to practice and promote.

These include being 44 times more likely to get HIV/AIDs, having faecal incontinence, engaging in substance abuse, hepatitis, HPV, syphilis, certain cancers, alcohol and tobacco abuse, worsening overall health conditions for individuals who have undergone transgender surgeries, as well as a considerably reduced life expectancy.

Consequently, Advocates for Christ, Ghana encourages Ghanaians and Parliament to support this bill and pay attention to the direct and indirect consequences of opposing this Bill and its provisions, and especially how it would ultimately harm the vulnerable, including individuals who associate with the LGBTTQI+ spectrum.”