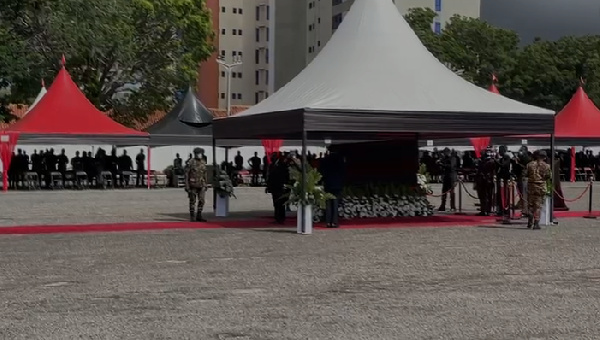 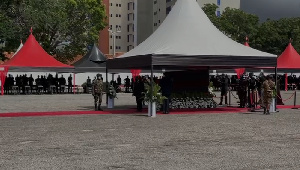 • Justice Samuel Kofi Marful-Sau is being laid to rest today

• The burial service is being held at the State House

Dressed in an all-black suit, the president, escorted by his security protocol, filed past the mortal remains of the late Supreme Court Judge to pay his last respects.

The president is one of other dignitaries present at the state burial of the late Justice Marful-Sau being held today, Friday, October 8.

The late Justice reportedly died after contracting COVID-19 and his demise was announced on Tuesday, August 10, 2021, after he passed away at the Ga East Municipal Hospital in Kwabenya.

The burial service is being held at the State House in Accra after which he will be laid to rest at the Military Cemetery in Burma Camp.

Prior to his demise, Justice Samuel Kofi Marful-Sau was an active justice of the Supreme Court of Ghana.

Marful-Sau was born in Assin Adubiase in the Central Region. After qualifying as a Barrister-at-law 1984 he worked at the office of the Provisional National Defence Council and entered private legal practise prior to being called to the High Court bench in June 2002.

He subsequently became an Appeal Court judge in 2006 and in 2018 he was appointed justice of the Supreme Court of Ghana.

He was nominated in 2018 by President Nana Addo Dankwa Akufo-Addo in consultation with the Council of State and the advice of the Judicial Council.

Marful-Sau was born on 3 February 1956 at Assin Adubiase in the Assin South District of the Central Region.

He began his formal education at Methodist Primary School in Assin Adubiase from 1963 to 1965. He continued his elementary education at Sempe ‘1’ Primary and Middle School in Accra from 1965 to 1969, he later enrolled at the Urban Council Middle ‘A’ School at Mankessim where he studied from 1969 to 1972.

He entered the University of Ghana in August 1979 and graduated with his bachelor of laws degree in July 1982. He continued at the Ghana School of Law where he received his Barrister-at-Law in 1984.

In September 2008 he entered the University of Dundee, Dundee, Scotland to pursue a Masters’ degree (LL.M) in Petroleum Law and Policy. He graduated in October 2009.

Marful-Sau was admitted to practice in Ghana as a Barrister-at-Law and Solicitor in 1984. He began his career as a national service personnel working in the capacity of a Legal Assistant at the Castle Information Bureau Office of the Provisional National Defence Council (PNDC) and briefly as a prosecutor in the office of the Special Public Prosecutor from August 1984 to July 1986.

During the period of his national service, he was selected to study a six-month course in Intelligence Studies at the Security and Intelligence Academy in Moscow, Russia. In July 1986, he was attached to the office of the PNDC, he remained there until September 1987.

A month later, Marful-Sau joined Vidal. L. Buckle and Company as a private legal practitioner. While in private practice, his areas of expertise included: Nationality, Immigration, Corporate, Commercial and Insurance Law. He remained in private legal practice until June 2002 when he was called to the bench as a judge of the High Court.

Marful-Sau was nominated together with three other judges (Justice Agnes Dordzie, Justice Professor Nii Ashie Kotey and Justice Nene Amegatcher) by the president of Ghana, Nana Akufo-Addo in 2018.

After the names of the nominated judges were sent to parliament, there were claims that his appointment and the appointment of Justice Agnes Dordzie were rewards and not justified as their promotions occurred after they (Justice Samuel Marful-Sau and Justice Agnes Dordzie) recommended that the Electoral Commission Chair, Mrs. Charlotte Osei be removed from office.

The government, however, dismissed these claims claiming the nominations were in consultation with the Council of State and based on the advice of the Judicial Council.