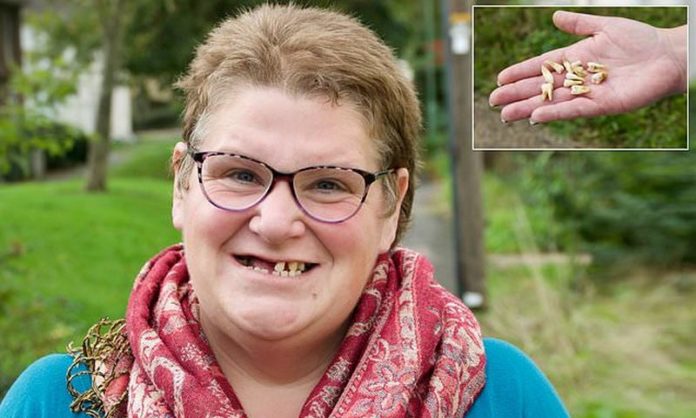 A mother, who desperately tried to find an NHS dentist for six years, has resorted to pulling out 11 of her own teeth because she couldn’t afford private treatment.

Danielle Watts, 42, who lives in Bury St Edmunds in Suffolk, had to resort to a DIY dental method after she was left in excruciating pain and was having to take painkillers every day due to severe gum disease.

Ms Watts tried to find another dentist for six years, who was willing to take on her and her two children Oscar, 12, and Eliza, eight, after her NHS practice suddenly closed down in 2015.

She could not afford private treatment and admitted that before lockdown, her teeth started ‘dying off one by one’ and she faced ‘constant pain’.

Despite her desperate calls to dentists over the years, she said none were willing to take on new NHS patients and she was forced to undertake the dental treatment herself.

Ms Watts, who is training to be a teaching assistant, said: “I am in constant pain and feel so disheartened because there is just no help out there.

“I have had really bad gum disease over the last couple of years and my teeth have started dying off one by one.

“It has got to the point where I squeeze them and they just pop out. I have lost 11 so far and I think I am going to lose them all at this rate.

“I have been trying so hard to find an NHS dentist, but there is just nobody out there. It is awful really, but there is nothing I can do.”

The mother-of-two is having particular problems because Suffolk is one of the hardest hit areas to be hit by the UK’s nationwide shortage of dentists.

She said she rarely had dental problems when she and her children were having regular annual checks ups with her old dentist.

Ms Watts added: “I knew they were having issues because they kept on cancelling appointments and then I got a letter saying they were shutting.

“I didn’t realise it would be so hard to find another NHS dentist until I started to look around for another one.

“I found a list of dentists and called every single one in Bury St Edmunds as well Newmarket, Mildenhall and Stowmarket.

“But none of them would take us all on as NHS patients. Some would not even answer the phone or respond to messages.

“Some would tell me to ring back in four months, but then when I did that, it was the same story and they still didn’t have any place.

“Then when Covid happened, I had to give up completely because there wasn’t a chance of getting anything.”

Ms Watts said her teeth began to deteriorate two years ago, forcing her to take painkillers every day.

She said: “My gums receded and I suffered bone loss so the roots of my teeth were being exposed.

“I would be in agony as they got more and more wobbly until they died, and then I would just be able to squeeze them out.

“I have had to use needles and a large toothpick to lance abscesses and infections in my gums, and then rinse my mouth out with salt water.

“I find eating really painful and I have to cut my food into tiny pieces. Even eating a banana is painful and I cannot have a cold drink because it makes the pain worse.

“There have been times when I have called 111 because the pain gets so bad. The last time was in November when I had the pain shooting up my face and I was unable to sleep all night.

“They took my details and a dentist person phoned me back. I explained I was in serious pain and had quite bad gum disease.

“But because my face wasn’t swollen, it was not serious enough to be seen by anyone. I was just told to take painkillers and ride it out.

“It got to the stage where I was losing a tooth every few months, but it has got worse and I have lost four in the last six months.

“The last dentist I tried was one in Newmarket last April, and they told me to phone back in June. But when I rang them back, the phone just rang and rang, so I gave up.

“My gums are receding so much on my remaining teeth, so it is inevitable that I am going to lose them as well.

“I feel so powerless, and it is affecting my confidence. I have ended up speaking with a lisp and it is difficult to make myself understood when I am wearing a mask.”

Miss Watts said she cleaned her teeth twice a day, but found it too painful to use an electric toothbrush because of the vibrations.

She remains worried about her childrens’ teeth and fears her son may soon need a brace fitted.

Ms Watts went on: “We do our best to look after our teeth and we don’t have fizzy drinks in the house. I just feel that I have been fobbed off.

“I hate smiling at people in public. I am just a normal mum with normal children, but I worry what people are thinking about me.”

The UK is said to be facing a shortage of dentists taking on NHS patients due to problems with recruitment and increased running costs.

Dentists argue that the low rates they receive from the NHS, and contract requirements including financial penalties make it difficult to provide treatment in a financially viable way.

The rules have led to more practices turning to more lucrative private work and not taking on new NHS patients.

He described the NHS dental system as ‘unquestionably broken and completely unsatisfactory’, and said that there had been ‘no significant progress to meaningfully address this worsening crisis’

Mr Yakoub added: “We hear daily from people struggling to access NHS dental care, and there is huge inequality developing around who can access the services they need.

“Our concern lies mostly, but not exclusively, with those who simply cannot afford to pay for private care and who may suffer other consequences to their physical health and mental health as a result.”