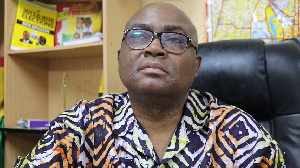 Alan Kwadwo Kyerematen stands to lose big if Boakye Agyarko and Kennedy Agyapong press on with their intentions to contest the flagbearer position of the New Patriotic Party for the 2024 elections.

This is the view of ace pollster, Ben Ephson who reckons the three stalwarts represent the same bloc of the party.

He described the other candidates as ‘soup mixers’ who will just make up the numbers and not break into the top two.

He insisted that it will be in the interest of Dr. Bawumia if Kennedy Agyapong and Boakye Agyarko contest as they will draw votes from Alan Kyerematen’s block.

He also does not expect any candidate to emanate from the Bawumia side to destabilize and threaten his chances.

“Alan and Bawumia are the key (contenders) but you have two or three mixing the soup. Kennedy Agyapong, Boakye Agyarko and Joe Ghartey,” he said.

“I think they will be collecting more votes from Alan Kyerematen. If you put up the three other candidates I have mentioned and collectively they have a total of 30%. If they have that amount of votes, I believe that 20% will come from Alan’s basket of votes.”

His views were rejected by Dr. Kobby Mensah who reasons that Alan Kyerematen has built a constituency of his own over the years.

He added that the NPP has a reputation of rewarding loyalty and following tradition and that could do the trick for Alan Kyerematen.

“I think over the years Alan has built a consolidated support base. He has been running over the years so he has some base. I’m not sure any other candidate has the ability to dissipate his votes,” he said.

The issue of who represents the NPP in the 2024 elections has been resurrected by some remarks made by President Nana Addo Dankwa Akufo-Addo during his visit to the Asantehene Otumfuo Osei Tutu last week.

President Akufo-Addo jested that Alan Kyerematen and Dr Owusu Akoto Afriyie are jostling for his position.