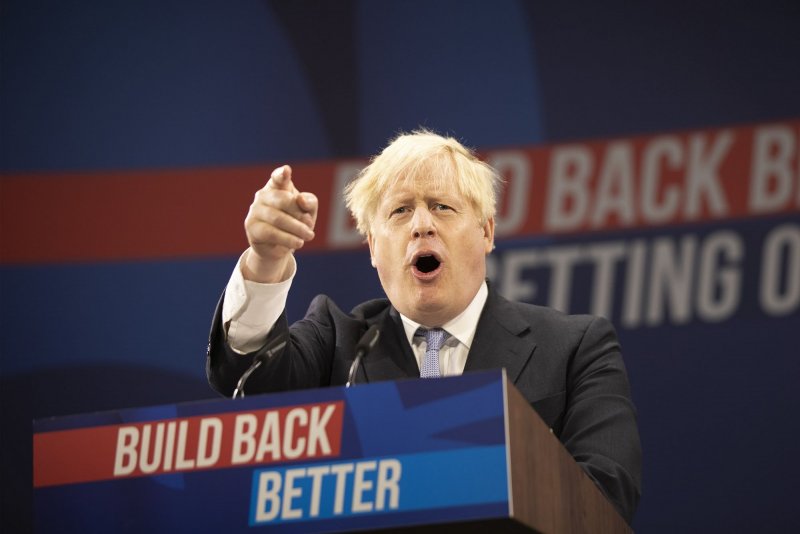 Oct. 6 (UPI) — British Prime Minister Boris Johnson gave a rosy outlook for Britain’s near future on a number of issues on Wednesday at the Conservative Party’s annual conference.

In his keynote speech, Johnson expressed an enthusiastic and optimistic assessment of the bruised British economy as it continues to rebound from COVID-19.

Johnson’s speech marked the end of the four-day conference and sought a positive spin for an economy that’s also still adjusting to the post-Brexit era.

Johnson told the party that his Cabinet is determined to “get on with our job of uniting and leveling up” across Britain. In keeping with the “leveling up” theme, he also announced a premium of up to $4,000 to encourage math and science teachers to work in different parts of the country.

In a briefing note after the speech, the Conservative Party said the premiums will help recruit and retain teachers in areas where there are shortages.

The prime minister promised to address the “long-term structural weakness” in the domestic economy.

“After decades of drift and dither this reforming government, this can-do government that got Brexit done, is getting the vaccine rollout done and is going to get social care done,” Johnson said.

“We are dealing with the biggest underlying issues of our economy and society, the problems that no government has had the guts to tackle before.”

Also, Johnson promised that he won’t fail when it comes to the safety of British women, acknowledging the life sentence given last week to former London Metropolitan Police officer Wayne Couzens for killing Sarah Everard early this year.

“I tell you this — We will not rest until we’ve increased the successful prosecutions for rape, because too many lying, bullying, cowardly men are using the law’s delay to get away with violence against women, and we cannot and will not stand for it,” he said.

Some critics said Johnson’s speech was long on pep talks but short on policy plans.

“Boris Johnson’s vacuous speech summed up this whole Conservative conference,” Labor Party Chair Anneliese Dodds said, according to The Guardian. “The PM talked more about beavers than he did about action to tackle the multiple crises facing working people up and down the country.”