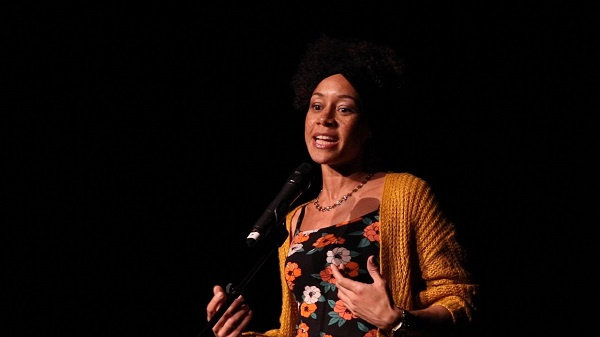 British-Ghanaian FLO poet Miss Yankey is currently in Ghana for a short time, where she will begin the task of researching and developing a brand new historical script; alongside filming some exclusive material for Black History Month, and working on collaborative projects with Ghana’s award-winning Rhyme Sonny.

The writer and spoken word artist has captivated audiences from London to Paris, to New York, and as far as Melbourne becoming an X4 international slam champion. Her energy is unmistakable, every word she spills is carefully crafted, performed with passion, and loaded with authenticity.

As a part of the international collective ‘FLO Poets’ Miss Yankey is mentored by x7 times Grammy award-nominated Natalie ‘The Floacist’ Stewart, and hosts at two of London’s most popular spoken word shows, The Chocolate Poetry Club and Mind Over Matter.

1. Nominated and shortlisted for ‘The Best Spoken Word Performer’ at the 2018 Saboteur Awards, the 2019 Poetry Awards, and the Jerwood Fellowship 2021.

2. Has collectively captured the attention of audiences at venues in London, New York, Edinburgh, Paris, Madrid, Amsterdam, and as far as Melbourne, Australia.

3. Hosted hundreds of spoken word artists during my time at Chocolate Poetry Club and Mind Over Matter, building a rich and diverse network of talent.

4. Facilitated 100s of Spoken Word Poetry Workshops to both the general public and a huge array of clients including the Historic Royal Palaces, BBC Radio London, London Academy of Excellence, Southwark Council, and Loughborough University to name a few.

6. Created protest art in my role as a spoken activist, performing for a variety of organizations including Black Lives Matter and the Stop Trump Coalition.