When will Mahama come back to power to help Ayawaso West Wuogon shooting victims? 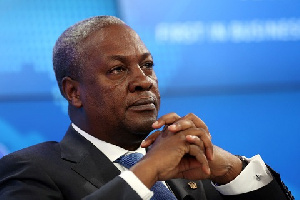 • Reacting to the development, former President Mahama assured them of a reimbursement of their monies if voted back into power

• But John Boadu has poured scorn on Mahama’s statement

The General Secretary of the governing New Patriotic Party (NPP), John Boadu, has wondered when former president John Dramani Mahama will come back into power to compensate the victims of Ayawaso West Wuogon shooting incident.

He accused John Dramani Mahama of living a hypocritical life.

According to John Boadu, it’s about time John Mahama puts an end to it because some people suffered injuries from violence under his government and nothing was done about it.

He said, the Mahama-led administration did nothing for these affected ones and wondered why he is so much interested in that of the Ayawaso West Wuogon.

Speaking on Neat FM’s Ghana Montie programme, John Boadu said, “When will they (NDC) come to power to help these people?…Sometimes he (Mahama) thinks we have short memories,” he said.

“Former President Mahama is being a hypocrite. He must put a stop to it. There are equally victims of violence from his government, what has he done to those people and their families?” he asked.

On Monday, October 4, 2021, John Dramani Mahama noted that his party, the National Democratic Congress (NDC), when voted back into power will ensure that compensations due the victims of the Ayawaso West Wuogon by-elections will be given to them.

He also stated that persons who committed the heinous crime will not be allowed to go scot-free.

John Dramani Mahama said this when he met with the victims and families of the Ayawaso West Wuogon incident.

He called on Ghanaians not to forget this tragic incident.

He said, “no matter how long it would take, the NDC would pursue every possible means to ensure that those who committed the crimes are punished and all compensations due the victims fully paid.”

It would be recalled that some masked men were caught on camera beating up civilians during the Ayawaso West Wuogon by-election.