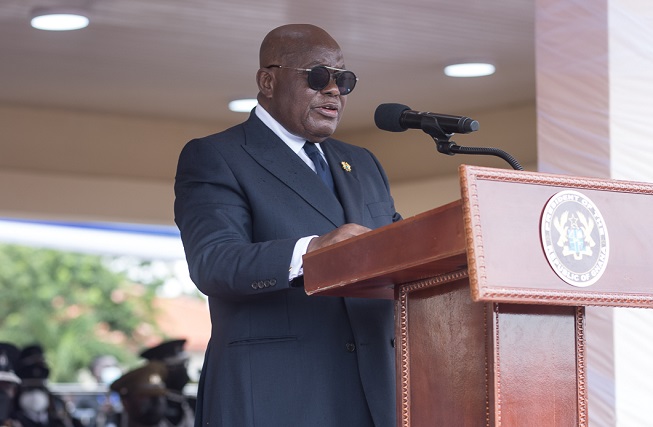 PRESIDENT Akufo-Addo has stated categorically that he has no clear favourite within the New Patriotic Party (NPP) fraternity to succeed him as president after his tenure expires on January 7, 2025.

He has rather promised to ensure a fair and level playing field for all NPP members that have ambition to lead the party as presidential candidate in the 2024 presidential election so as to help protect the unity, peace and progress of the party.

He also said the eventual successor as NPP flagbearer would have his unalloyed support to break the eight years jinx which the ruling NPP has christened ‘Breaking the 8’.

Furthermore, he also promised to allow the party’s rank and file across the country and even beyond, who he said are the real owners of the NPP, to freely elect their favourite candidates to lead the NPP during the December 2024 presidential and parliamentary elections.

“I don’t have any clear favourite within the NPP family to succeed me as President after I have duly completed my second term and left political office; in fact, I will work to ensure a level-playing field for all NPP members that want to become president,” the President said on Pure FM in Kumasi yesterday.

Many stalwarts of the party have started lacing their boots to lead the NPP in 2024 when the President completes his second and final term.

Last Friday, at Manhyia in Kumasi, the President caused spontaneous laughter when he was introducing some of his ministers who accompanied him on his Ashanti Regional tour to the Asantehene Otumfuo Osei Tutu II.

President Akufo-Addo started his address on a lighter note by informing the Asantehene that two of the members in his entourage were nursing ambitions to become President after he had exhausted his second term in office.

In a jovial manner, he said “Otumfuo, let me introduce our Agric Minister, Dr. Owusu Afriyie Akoto to you; Otumfuo for your information, Akoto wants to become president after I have left office,” he said amid laughter and applause.

When the laughter was subsiding, President Akufo-Addo introduced another one when he said again that “Otumfuo this is Alan Kyerematen, the Trade and Industry Minister, he has also eyed the presidential seat for a long time.”

Speaking in an interview with Kwame Adinkra of Pure FM yesterday, President Akufo-Addo indicated that it would be unfair on his part and dangerous for the unity, peace and progress of the NPP, if he decides to stick his neck out and support one aspirant ahead of the process.

According to him, his current position as the President of the land and leader of the NPP, makes him a ‘father’ of the entire NPP fraternity, so it was important that he stayed neutral, especially in the selection of the next NPP presidential candidate.

“If I show bias in the selection of our next flagbearer, it would destabilise the party and cause chaos, which we all don’t want; so I have to stay away from the selection processes so that the choice of the party people would emerge as flagbearer,” the President pointed out.

He was of the view that if the party people were allowed to freely select the next presidential candidate of the NPP for the 2024 elections, definitely party unity and peace would be protected, thereby leading to a united NPP campaigning to retain political power.

President Akufo-Addo, however, stated that he would personally lead the campaign for the eventual choice of the party as the next presidential candidate, in order to help the NPP to make history by being in power for three consecutive terms.

“I will wholeheartedly support the person that the NPP members elect as the flagbearer for the 2024 general elections. If, God willing, I have the strength, I will surely lead in the campaign to help our party to win the 2024 national elections,” he assured.

According to the President, as part is his personal efforts to help the NPP to break the eight during the 2024 polls, he is determined to work assiduously so that a concrete foundation would be laid for the NPP to run its campaign and retain political power in 2024.

He said he is confident that the numerous successes that his administration has chalked in the education, health, road, agriculture and other sectors of the state, would be the springboard to carry the next NPP flagbearer to a historic electoral victory in 2024.

“I know that my positive works in political office would make it easier for the next NPP flagbearer to campaign and achieve his/her dream of succeeding me, but we cannot win political power by my records alone as we have more to do to win more votes,” he added.

President Akufo-Addo also stated that it is important for the electorate to retain the NPP in political office during the 2024 elections so that the country would not slip from its current path of hope, progress, and development.

He observed with pain that the country retrogressed significantly after former President John Agyekum Kufuor, who had worked tirelessly to restore the country from hopelessness to the path of development, left political office on January 7, 2009 and the NPP could not retain power.

“This sad incident happened because the NPP could not retain power in 2008 to continue with Mr. Kufuor’s extraordinary works. I am praying that the mistake of 2008 would not be repeated in 2024 and the NPP would retain power to sustain its good works.”

According to him, just as he has done currently in political office, Mr. Kufuor also laid a concrete foundation for the country to remain on the path of progress but the NDC, after winning the 2008 polls, mismanaged the country and drew the forward march of the state backwards.

President Akufo-Addo, again, reminded the public about the need for them to retain the NPP in political office for a longer time, saying that the NPP has competent, visionary, hardworking and patriotic people to always lead the country to the Promised Land.

He said nation building is not a one-day work but a process, which requires competent and hardworking men and women, who would continuously implement positive policies and programmes, leading to development.

He said “it is only the NPP that has such competent people.”