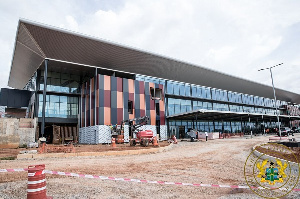 The Kumasi International Airport will be completed in June 2022

• The Kumasi International Airport will get a new fuel farm

• It will be constructed by state-owned OMC, GOIL

A state-owned oil marketing company, GOIL has said it will fund the construction of a new fuel farm at the yet-to-be-completed Kumasi International Airport situated in the Ashanti Region.

According to an Aviation Ghana report, the state-owned OMC said the move is necessary to ensure the stable supply of aviation jet fuel which is paramount to the operations and functions of the airport.

“However, given the passenger and aircraft movement expected at the Kumasi after it is completed and handed over to government in October 2022, the current fuel farm cannot meet the demands of the future,” the portal wrote.

For the time being a certain amount of fuel storage tanks are expected to be provided at the airport to hold aviation fuel.

The Kumasi Airport when completed in June 2022 is expected to handle 800,000 passengers per annum.