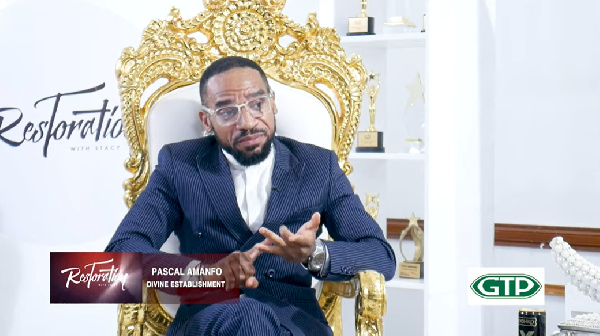 • Pascal has consequently formed a ministry

Filmmaker Pascal Amanfo has observed that people who announce their decision to accept Christ are subjected to mockery, a practice he wished would discontinue.

“It’s funny how people mock you for coming to Christ and celebrate you when you were doing all the nonsense”, he said on Restoration With Stacy.

Pascal Amanfo who proclaimed in 2015 that he was focused on living a life that pleases God said on the show that a number of people who have turned a new leaf need to be guided in order not to return to their previous states.

He said: “I feel that the older generation doesn’t really know how to counsel young people and they are majorly inaccessible to those generations because the kind of stuff they are into, it’s either they get shot down, scolded or rebuked. Some of them just want someone to talk to sometimes. The depressive tendencies, suicide tendencies… it’s crazy.”

“I’m majorly accessible to young people. I share my story; I want to hear your story. And I try and guide them. We have this meeting we call ‘come as you are’. It’s not a regular church. Just come with your crazy hairstyle…” he added.

Meanwhile, Pascal Amanfo has urged born-again Christians to not quit their careers. He is of the view that is it imperative for one to stick to one’s career and not necessarily call it quits after seeing Christ because the career path is a powerful instrument that could be used in propagating the gospel.

“I went through a wilderness moment where I was in isolation because I felt I needed consecration. Even at that, I always knew there is a career and a calling. And that the career is given for the calling”, he argued.

“You do not light a candle come out at 12 noon; it has no power. The power of light is in the so-called configurative darkness. So, you don’t get born again and leave this so-called dark world. No, your light has to shine. The reality of your being a new creature is when your light shines in the midst. You see people you once did stuff with and they can testify that ‘he’s changed’”.

Watch his interview below.