I’m a bonafide son of the NPP, my critics should flex their muscles if they have any – Boakye Agyarko 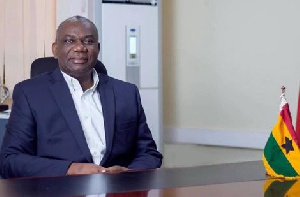 • Former Energy Minister, Boakye Agyarko has announced his interest to lead the NPP into the 2024 elections

• According to him, his loyalty to the party places him at an advantageous point

Former Energy Minister, Boakye Kyeremateng Agyarko has reiterated his relentlessness in pursuing his presidential ambitions ahead of Ghana’s next general elections.

Speaking to JoyNews in an interview, Mr. Agyarko officially announced his interest in the presidential candidacy ahead of the 2024 elections on the ticket on the New Patriotic Party (NPP).

According to him, his loyalty to the party remains unquestioned considering his political journey and credentials. It is for this reason he believes allegations against him by critics will not be enough to dissuade him in his quest.

“If my critics have muscles, let them flex. I am a bonafide son of this party, I am a founding member of this party. I have worked hard and long in this party so if anyone thinks that I don’t have credentials in this party, how did I become campaign manager? Let he who alleges, prove their case. You cannot allege and let just an allegation stand,” he said.

His comments come on the back of suggestions that his alleged involvement in the AMERI deal and amendment agreement, which led to his subsequent dismissal, may affect his chances of leading the party as a presidential candidate.

The former energy minister, however, believes they are mere allegations which will be addressed in due time. He meanwhile dared his critics to provide evidence to back their allegations if indeed they have any.

“But at the appropriate time, that issue will be fairly answered to the discomfiture of a lot of people. At the end of the day, every politician is going to have an allegation against them. That is the nature of our politics, that is the nature of society. I am not afraid of allegations, so long as my conscience and my heart are clear. They will not impact or in any way affect my political career from going forward. My contribution to this party is solid, I am proud of it and I will continue to serve this party,” he added.

Boakye Agyarko is one of several candidates tipped to vie for the presidential candidate slot to lead the NPP in the 2024 elections.

Other names including that of Vice President, Dr. Mahamudu Bawumia, Agric Minister, Dr. Owusu Afriyie Akoto, Trade Minister, Alan Kyerematen among others have come up as potential candidates for the position.