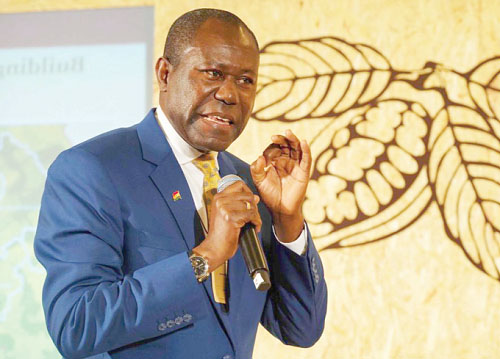 THE GHANA Cocoa Board (COCOBOD) says its attention has been drawn to a front-page story in the Wednesday, September 29, 2021 edition of The Inquisitor newspaper, with a headline “Cocoa Export Under Threat”.

According to the regulator, the publication stated that the shipment of Ghana’s cocoa to the global market was under serious threat, as companies involved in the exercise were crying foul over maltreatment meted out to them by the Cocoa Marketing Company (Gh.) Ltd (CMC), a wholly owned subsidiary of COCOBOD.

Indicating that management of COCOBOD found the allegation ill-considered, false and malicious, it said CMC had over sixty (60) years of experience in the shipment of cocoa and performed such role exceptionally with highly skilled and competent staff.

Also, it said all of its operations, including the determination and allocation of shipments, were well defined and structured; while also such structures did not allow any individual or group of individuals to have undue leverage in determining which shipping lines got freight allocations.

Furthermore, COCOBOD explained, “As at the date of the publication, neither COCOBOD nor CMC’s attention had been drawn to any such threat(s) and/or intimidation from its staff or have by themselves issued any such threat to any shipping line in the determination and allocations of shipmentsas alleged by the newspaper. COCOBOD thus requires the paper to make available to it the petition it claims to have in its possession on the alleged threat(s) and intimidation from its staff.”

“It is clear from the publication that the writer does not understand the business of COCOBOD and its subsidiary, the Cocoa Marketing Company (Gh.) Ltd.

“Should The Inquisitor newspaper fail to do so, COCOBOD and CMC reserve the right to seek appropriate redress,” it warned.

MPS to get additional 15 Gantry Cranes at Terminal three