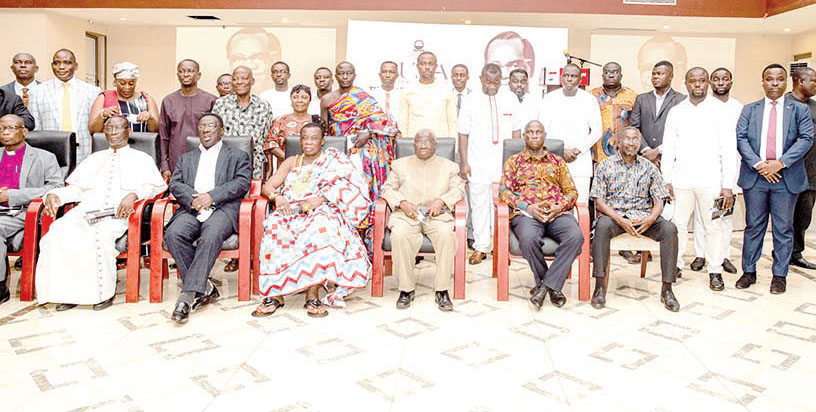 Dignitaries in a pose after the activity

The 2021 Busia Memorial Lecture has taken place in Sunyani in the Bono Region to commemorate the life and works of the late Dr. Kofi Abrefa Busia, Prime Minister of the Second Republic of Ghana under the theme, ‘The Youth in a Free Enterprise Society.’

Former President J.A. Kufuor, who was the keynote speaker but whose message was delivered in a video recording, said Busia was his role model and a leader who meant well for Ghana.

“He intended to build the framework that would encourage the citizenry to create wealth because he had confidence in the Ghanaian. He created the Rural Development Ministry and with it, he launched a programme to build the feeder roads all over the place to open up the country and also dotted the country strategically with health centres, potable water supply, and educational infrastructure,” President Kufuor stated.

The former president charged the youth to uphold the legacy of Busia to get the country to achieve its desired goal of prosperity for all.

Prof. Christopher Ameyaw Akumfi, the Board Chairman of the Public Procurement Authority who chaired the function, called for tolerance amongst politicians, which he said was a mark of Dr. Busia.

Mr. John Kumah, a Deputy Minister of Finance and Economic Planning, who spoke on the sub-theme, ‘Fixing the Country, the Need for a Paradigm Shift’, noted that gone were the days when companies pitched camps to draw students leaving colleges into their fold for immediate employment. He said the new trend across the globe was to encourage young people to create wealth by solving problems.

The special guest of honour, Okokyeredom Sakyi Ako II, the Omanhene of Drobo Traditional Area and Vice President of the Bono Regional House of Chiefs shared his personal experiences with Dr. Busia and called for politics of decency as exhibited by the late Prime Minister.

In a speech of the Bono Regional Minister delivered on her behalf by Mr. Kwasi Ameyaw, MP for the Sunyani East Constituency, she announced the street from the Sunyani Post office and Fiapre roundabout had been named after Dr. Busia in appreciation of his tremendous contributions to the country and humanity.

Other speakers at the event included Mr. Evans Opoku Bobie, the Deputy Minister of Youth and Sports and Nana Kusi Apea Busia Junior, a research fellow at the University of London.

Amongst the dignitaries who graced the event were Most Rev. Dr. Matthew Kwasi Gyamfi and Rt Rev. Kwasi Tannor, bishops of the Sunyani Diocese of the Catholic and the Methodist Church Ghana respectively, as well as representative of the Bono Regional Chief Imam. Others were Kwadwo Adjei Darko, a former Minister of State; Alfred Tuah-Yeboah, Deputy Attorney-General and Minister of Justice; Nana Obiri Boahen, Deputy NPP General Secretary; Paul Apraku Twum Barima, the MP for Dormaa East Constituency; a representative of Martin Adjei-Mensah Korsah, Deputy Minister of Local Government, Decentralisation and Rural Development as well as some former and current district chief executives, heads of departments, teachers, students, representatives of youth groups and chief executives.

The Busia Institute, with the support of the Chief of Staff at the Office of the President, donated GH¢50,000 worth of Busia’s biography, titled ‘K A Busia: A Symbol of Democracy’ to all the tertiary institutions in the Bono Region and appealed for support from individuals and organisations to procure copies for all schools in Ghana.

The celebration ended with a wreath-laying and planting of trees at the Golden Jubilee Park in Sunyani by Okokyeredom Sakyi Ako II on behalf of the chiefs and people of the Bono Region; John Kumah on behalf of the Government of Ghana and Mr Anane Agyei, on behalf of the Busia Institute.

NPP Has Success Story To Tell With Northern Support- Annoh-Dompreh