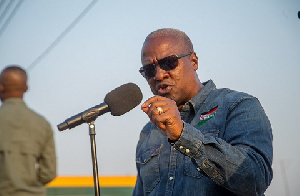 Former President, John Dramami Mahama, has said his party, the National Democratic Congress (NDC), when voted back into power will ensure that compensations due the victims of the Ayawaso West Wuogon by-elections will be given to them.

He also stated that persons who committed the heinous crime will not be allowed to go scot-free.

John Dramani Mahama said this when he met with the victims and families of the Ayawaso West Wuogon incident.

According to a citinews report, the spokesperson for the victims, Abdul-Razak Garba averred that none of the victims had received any payment from the government after the shooting incident.

He said, “The victims and their families have still not been compensated for the harm caused them, despite the recommendation by the Emile Short Commission.”

Reacting to this, John Dramani Mahama called on Ghanaians not to forget this tragic incident.

He said, “no matter how long it would take, the NDC would pursue every possible means to ensure that those who committed the crimes are punished and all compensations due the victims fully paid.”

“Ghana must not forget about what happened,” he added.

It would be recalled that some masked men were caught on camera beating up civilians during the Ayawaso West Wugon by-election.

Due to this, the opposition National Democratic Congress pulled out from the elections, following the shooting incident.

After the chaotic scene, government set up a committee (Emile Short Commission) to look into the matter.

The Commission took testimonies of principal witnesses in the matter including the Member of Parliament for Ningo Prampram, Sam George; the Commander of the National Security SWAT team, DSP Samuel Azugu; and the then NDC Parliamentary candidate, Delali Kwasi Brempong.

The Commission also interviewed over 20 other witnesses as part of the probe.

After presenting its report to President Nana Addo Dankwa Akufo-Addo, the Commission recommended that victims of the violence should be paid compensation for the harm they suffered.