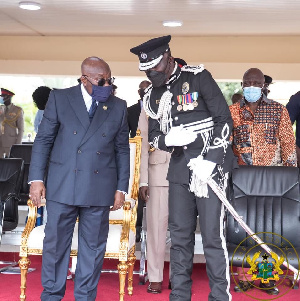 This comes after President Akufo-Addo has said the Ghana Police Service will take delivery of two (2) gazelle light attack helicopters and one (1) Airbus 350 helicopter, in November this year, to enhance its work.

According to the President, hangars for the helicopters, located at the National Police Training School, have been completed, and six (6) officers, who will fly these helicopters, have completed their training in South Africa.

The President made this known on Friday, 1st October 2021, when he delivered a speech at the graduation ceremony of the 50th Cadet Officers’ Course, at the Police Training Academy, at Tesano, Accra.

Speaking at the event, the President noted that Government, in recognition of the difficulties and dangers confronting police personnel in the discharge of their duties, remains committed to resourcing the Service, by the provision of adequate personnel and logistics to enable them deliver on their mandate.

“To this end, since I came to office in January 2017, a total of five hundred and sixty-eight (568) vehicles, including fifteen (15) operational buses, have been presented by Government to the Service, a feat unprecedented in its history,” he said.

Apart from the existing Formed Police Unit (FPU) in Accra, President Akufo-Addo revealed that an additional twenty-two (22) light armoured vehicles have been procured for use by the FPUs to be established in November in the Northern, Upper East and Ashanti Regions.

In the next one-and-half years, FPUs will be established in the remaining regions that do not have FPUs.

“Two hundred (200) motorbikes have also been distributed to members of the Community Policing initiative to boost the presence of the police in our communities. Modern communication equipment and four thousand, five hundred (4,500) fragmentation jackets have been procured and delivered to the Service to protect officers, and help ensure effective policing,” President Akufo-Addo said.

Reacting to these, The Police administration in a statement said “The President of Ghana, His Excellency Nana Addo Dankwa Akufo-Addo, on October 1, 2021, commissioned 129 Cadet Officers into the Senior Officers Corps of the Ghana Police Service during a graduation ceremony at the Ghana Police Academy (GPA) in Accra.

“The officers who constitute the 50th Course graduated after undergoing 9 months of rigorous training at the GPA. The Police Administration is grateful to His Excellency for gracing the memorable occasion.

“We are happy to share with you some memorable pictures of the graduation ceremony which was attended by notable invited guests, including former Inspector-Generals of Police, Service Commanders of sister security agencies, and retired Commissioners of Police.”