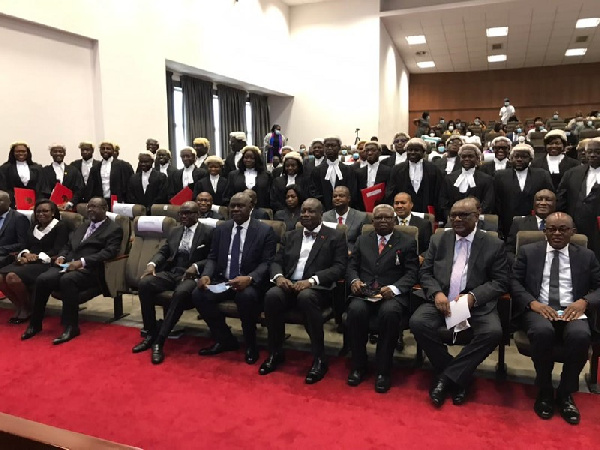 278 lawyers were called to the Bar on Friday

The 278 new lawyers who were called to the Bar on Friday, October 1, have been asked to manage their expectations in terms of salaries they will be receiving from the practice.

According to one Maxwell Kolog, the new wigs should know that law practice cannot be a medium to eradicate generational poverty, at least per his experience.

In a series of Tweets sighted by GhanaWeb under the handle @mkolog, Maxwell indicated that before he became a lawyer, he was a Teaching Assistant (TA) at Ashesi University where he was paid in dollars.

“Actually, it was the first time any job could pay him in any amount in dollars as his take-home pay, therefore, he had to engage in what is called ‘galamsey’ among young lawyers in order to survive.

Kolog explained further, “I am not saying you can’t be rich as a lawyer. Just helping new lawyers to unlearn the exaggerated impressions out there.”

Maxwell Kolog disclosed some hard times he went through before his eventual call to the bar citing an incident dating back to 2016 when results for their Part 2 exams were released. He said his name was on the referred list. “They said I have failed advocacy. Call to the Bar was the coming Friday, September 30, 2016.”

Kolog further indicated that, his advocacy script got missing at the Ghana School of Law.

“If your reason for becoming a lawyer is to eradicate generational poverty, forget it! Fresh lawyers, please manage your expectations,” Maxwell Kolog stated.

Meanwhile, Chief Justice Kwesi Anin-Yeboah has tasked the new lawyers not to entertain any corrupt behaviour in the line of their work.

Speaking at the Call to the Bar ceremony at the Accra International Conference Centre, he recited a verse in the Holy Bible that says: “Good name is better than riches” to stress his point.

“A Good name is better than riches. Please remember this Bible verse as you begin your journey, it will help you to avoid all the temptations and short cut that you are likely to encounter along the way.

“Resolve to be honest at all times,” he said. “Remember that the disciplinary committee of the General Legal Council takes actions when complaints are lodged against lawyers, it does not sweep these complaints under the carpet.”