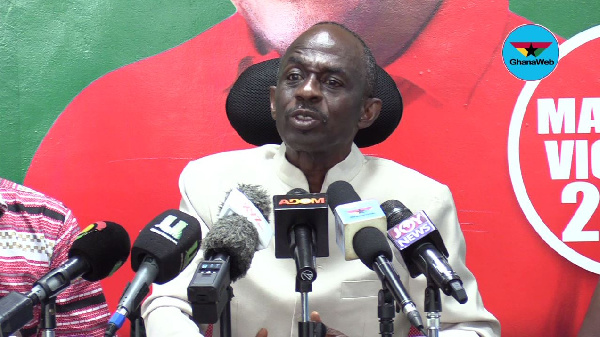 • He insists he is serious than General Mosquito and his known contender, Samuel Ofosu Ampofo

Professor Christopher Ameyaw Ekumfi, a former Minister of Education, is lacing his boots to contest for the national chairmanship of the ruling New Patriotic Party (NPP).

Whiles appearing on Accra-based Asempa FM in mid-week to discuss his candidature and plans for the party, he also addressed issues to do with the leadership of the main opposition National Democratic Congress, NDC.

Specifically, he responded to questions relating to the “seriousness” of aspirants running for the national chairmanship slot in the NDC.

“Sometimes, Ghanaians think politics is all about mounting [of] podiums and cracking jokes. Being a Chairman or a leader of a party is a serious business. If I am to pair with him (Asiedu Nketia) or any other person (Ofosu-Ampofo), I am the more serious of either of them.

“Asiedu Nketia and I come from the same town so we are brothers but he likes to joke too much. Some jokes are meant for home and not in politics. People in NDC may love him but NPP will not love his jokes, which to me is the distinction,” he said on Asempa FM’s Ekosii Sen programme.

He also accused the NDC of making statements that were more often than not without facts and stressed that his factual outlook was likely due to his work in academia relative to research and dealing with verifiable data.

Ameyaw Ekumfi is one of two people who have declared their intention to contest the seat currently held by Freddie Blay, the other is Stephen Asamoah Boateng.

In the NDC, Asiedu Nketia is widely rumoured to be lacing his boots to contest for the Chairmanship slot after serving for decades as General Secretary. All things being equal, he will come up against his current chairman, Samuel Ofosu Ampofo, when the next national leadership polls are held.