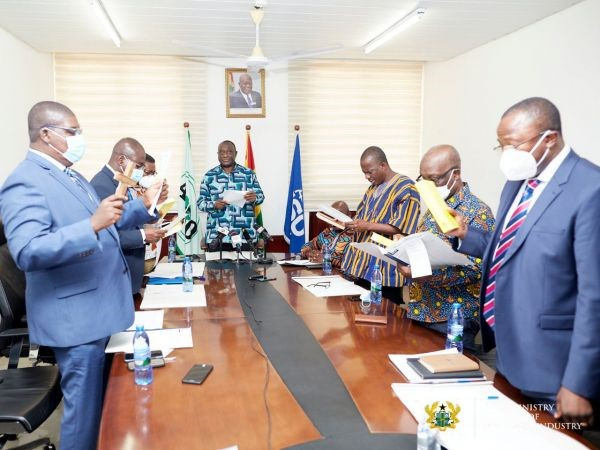 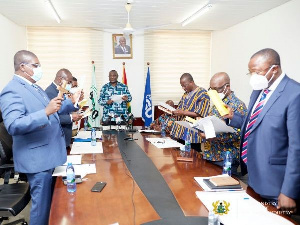 The Minister for Trade and Industry, Alan John Kwadwo Kyerematen, has sworn in and inaugurated the governing board of the Ghana Standards Authority (GSA), saying the authority’s success is extremely crucial to the government’s industrial transformation agenda.

Addressing the five-member governing board being chaired by Professor Felix Charles Mills Robertson, at a short inauguration ceremony this week, at the GSA head office in Accra, the trade and industry minister expressed conviction that the members of the board would not take lightly their appointment, particularly when the industrial transformation had since 2017 become the main driver of President Nana Addo Dankwa Akufo-Addo’s vision of a Ghana Beyond Aid.

“As you are aware…the Ministry of Trade and Industry, over the past four years, has been implementing an aggressive Industrial Transformation programme, anchored on a Ten-Point Plan which seeks to make Ghana the new Manufacturing Hub for Africa,” Mr Kyeremanten said.

“In this context, the Ghana Standards Authority (GSA) which is Ghana’s national standards body, national metrology institute, the national certification body for products and management systems and is also involved in trade facilitation at the ports of entry by carrying out an inspection of goods being imported or exported plays a very critical role,” he added.

It was in the light of the above, according to him, the ministry of trade and industry supported GSA to strengthen its operations by acquiring the needed equipment for laboratories, the building of Ghana and West Africa’s first AC testing laboratory, and procurement of equipment to check the accuracy of fuel sold at retail outlets.

Taking a cue from the previous board

Urging the newly inaugurated board to take a cue from the previous governing board of the authority, the trade and industry minister said GSA achieved a significant milestone through the Publication of Ghana’s First EVER Building Code. The Building Code, which was launched in 2018 specifies requirements for buildings, schools, roads among others aimed at giving “VALUE for MONEY’ in building.

He also recalled the indescribable role the authority played under the previous board in the development of the national automobile standards under the Ghana Automobile Development Programme which is being implemented by the Ministry of Trade and Industry.

GSA developed over 30 standards for vehicles, permitting homologation or certification of vehicles, making it possible for Ghana to assemble and later manufacture vehicles locally, the trade and industry minister stated.

He assured that the government through the Ministry of Trade and Industry would continue to support the operations of GSA to continue to play its significant role in the implementation of flagship programmes particularly the One District One Factory (1D1F) initiative, the Strategic Anchor Industries initiatives, Business Regulatory Reforms (BRR) programme as well as market integration frameworks such the African Continental Free Trade Area (AfCFTA), EU-Ghana Economic Partnership Agreement and Ghana-UK Trade Partnership Agreement.

“To be able to improve the performance of this important organization, there is the need to adhere to sound Corporate Governance and this Board is charged to work with Senior Management to develop policies and procedures for prudent use of the Authority’s resources,” he said.

Chairman of the newly inaugurated board, Professor Felix Charles Mills Robertson, expressed the sincerest gratitude of the members to the president for the honour done them.

He described their appointment as “wonderful news and an opportunity to serve mother Ghana” with the hope of bringing positive development to GSA.

“We shall ensure that the strategies and policies agreed by the board are effectively implemented by the director-general and the GSA management team,” he said, adding that the establishment of good corporate governance and procedures would be one of his administration’s topmost priorities.