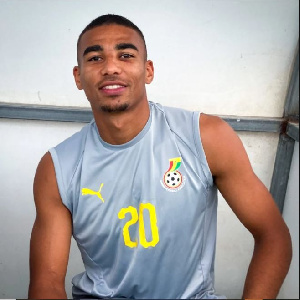 Ghana defender, Alexander Djiku has pledged to support the treatment of a young kid suffering from Angelman Syndrome.

The toddler, whose name has been revealed as Nathan, has been receiving support from his ‘god father’ Alexander Djiku.

The Strasbourg center back in June paid 2000 Euros for the child’s treatment of the syndrome and as part of efforts to ensure the young Nathan beats the sickness, he has called on fans to also support the course.

“I was very moved when Nathan’s parents proposed to me to become a sponsor of the association. I immediately accepted because the fight they lead alongside their son touches me. It was the sequel. logic of my commitment to their side, “he said.

Parents of young Nathan has also organised a raffle to solicit funds that will be channeled through the treatment.

“I know that the Strasbourg supporters have a big heart and I hope that as many as possible of them will mobilize for Nathan by participating in this raffle. All funds will be donated to the association and will be used to help Nathan’s parents to face the many expenses engendered by the treatments put in place so that their son may have the most dignified life possible,” added the Ghanaian footballer.