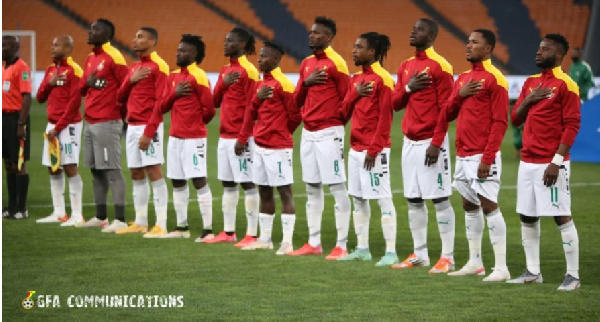 Black Stars line up before a match

Zimbabwe’s clash with Ghana in Harare will be played without fans following the latest decision by the Confederation of African Football (CAF).

CAF has denied Zimbabwe’s request to have a limited number of fans at the stadium for the World Cup qualifier scheduled for October 12.

“The Confederation of African Football has once again turned down our request to allow a limited number of supporters into the stadium for our FIFA World Cup 2022 qualifier against Ghana. CAF indicated that its decision was based on the review of Zimbabwe’s compliance to expected stadium requirements safety and security as well as medical issues at the National Sports Stadium,” a statement by Zimbabwe FA read.

“National Sports Stadium is currently hosting senior men’s international games on temporary approval, having deemed unfit in March 2020. Reasons for the ban include the absence of bucket seats and electronic access controls, among other issues.”

“While FIFA Covid-19 match protocols clearly state that all matches during the pandemic must be plaued behind closed doors, special exemptions to allow spectators into the stadium have been granted to nations with facilities that satisfy required standards.”

“The Zimbabwe Football Association appeals to government to accelerate renovations at the stadium so that football stakeholders can fully benefit from the massive commercial, social and entertainment potential of the game,” they added.

Zimbabwe will host Ghana three days after the first meeting between the two sides in Cape Coast.

Both teams are desperate for six points to improve their chances of qualifying for the final round where Africa’s five representatives for the World Cup in Qatar will be determined.

Ghana are second, a point behind Group G leaders South Africa while Zimbabwe languish at the bottom with one point.