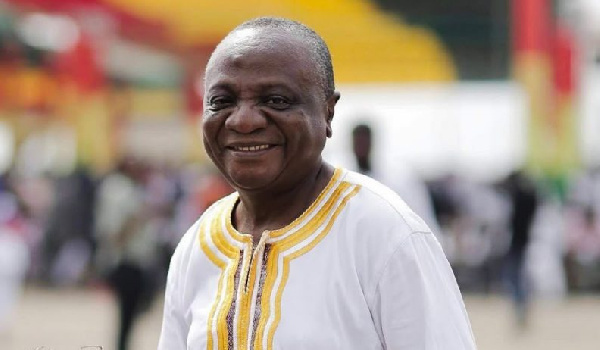 The Chief Executive Officer of the Ghana Rights Organisation (GHAMRO), Abraham Adjatey, has described Nana Kwame Ampadu as the “steel of highlife genre”.

The eulogy comes after news of the demise of the legend broke on Tuesday, September 28, 2021, evoking tears, sorrow and tributes from stakeholders, fans and the general public.

In an interview on Hitz FM, Agya Abraham, as he is affectionately called, said the contribution of Nana Ampadu to the Ghanaian music industry was enormous.

According to him, Nana Ampadu became an “enigma to the industry because people did not understand his level of creativity”. As a result, they accused the prolific writer and composer of using juju.

“Indeed, between 1964 and 1968, he wrote very good songs for some of the greats and we all grew up thinking they were music that the greats did,” he added.

Apart from being a performer, Nana Ampadu was concerned about the welfare of musicians. Agya Abraham recalled how the legend was impactful in the activities of the Musicians Union of Ghana (MUSIGA) as well as GHAMRO.

He said: “You know what Kwame Ampadu did with MUSIGA, his involvement in collections management in this country was way back in 1982. He was part of the agitation and he helped set up the Copyright Society of Ghana. Kwame Ampadu and 99 others went to court and that has brought us this far. Kwame has paid his dues.”

Nana Ampadu, 76, was said to have died at the Legon Hospital after battling an undisclosed illness.

Born on March 31, 1945, Nana Ampadu gained prominence in 1967 following the release of a politically motivated song ‘Ebi Te Yie’ – to wit, some are comfortable. This was after the formation of the African Brothers Band in 1963.

He had over 800 songs. Nana Ampadu who was nicknamed ‘Adwontofo Nyinaa Hene’ translated as ‘The king of all musicians’ was known for a number of qualities, including but not limited to his captivating storytelling ability which punctuated his songs, stage performance and unique voice.