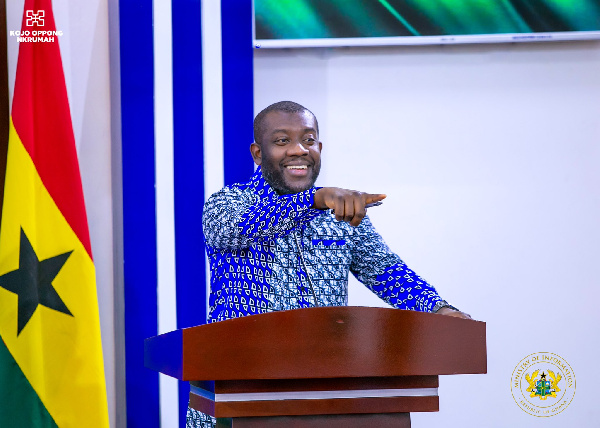 Access to information is a prerequisite tool for democracy to thrive.

The 74th UN General Assembly, in recognition of this fact, has thus ordained 28th September every year, as the International Day for Universal Access to Information.”

Mr. Kojo Oppong-Nkrumah, Minister of Information, on Tuesday said this in Accra at a Public forum, which formed part of activities to mark the Right to Information Week.

Mr. Oppong-Nkrumah said one key role of the act, was to prepare public institutions to deliver on their obligations and the Ministry of information had established the Access to information Division within the Information Services Department, adding that the division was responsible for training and deploying Access to Information (ATI) Officers to Ministries, Departments and Agencies, to facilitate access to information, upon request.

The Minister said the division also provided technical support to the ATI officers on their activities, adding that the division had so far trained 1055 officers, who were tasked to facilitate and process access to information requests.

He said the Ministry through the information Services Department ATI division, also developed an online records management system, to provide IT net solutions that would help to manage online applications under the RTI 2019.

The Minister said even though it was intended for the RTIC to have representation in every region and district, the online platform would also enable citizens access information effectively.

Mr Opong-Nkrumah said the online application was expected to be operationalised by the end of this year.

He said in compliance with the RTI act, the Ministry of Information had successfully laid before Parliament, the maiden annual report of activities of public institutions, as well as those of the Commission for the year 2020.

The Minister said his outfit would continue with efforts to ensure the success and effectiveness of the act, and also protect the right of the citizenry to access information.

He said the Government of Ghana, highly acknowledged the support of all stakeholders towards the implementation of the act, and was committed to ensuring that the RTI was implemented.

He said for the country to gain from the benefits of the act, the citizenry needed to be well educated on their rights and obligations concerning the act.

Justice Ofori- Atta urged the media, civil society organisations and the entire citizenry, to take advantage of the act, towards helping to build a stronger nation, through accountable governance.

He said globally, the UN, UNESCO, UNDP, and its partner institutions would host Webinars on the 28th and 29th of September, which would focus on the central role of access to information and its implementation in operating strong institutions, that contributed to the public good.

Mr Abani added that it would also focus on the need to strengthen International cooperation in promoting and implementing the right to information, as a fundamental human right.

“In many countries, laws are passed, but the lens in which they operate are poorly institutionalised making them ineffectual,” he said.

Mr. Abani said access to information was critical to achieving Sustainable Development Goals and the UN was working with the media coalition on RTI and the Ministry of information to build the capacity of people on information monitoring tools.

Mr Abani said at the end of their engagement UNESCO Would produce global reports on progress in the field of access to information.

He said data, information and knowledge, were essential to progress in any society, adding that access to information would stifle the effects of hate speech, misinformation and ensure, that citizens were able to focus and engage constructively.

President Nana Addo Dankwa Akufo-Addo on May 21, 2019, signed into law the RTI, Act.

This was about two months after it was passed by Parliament.