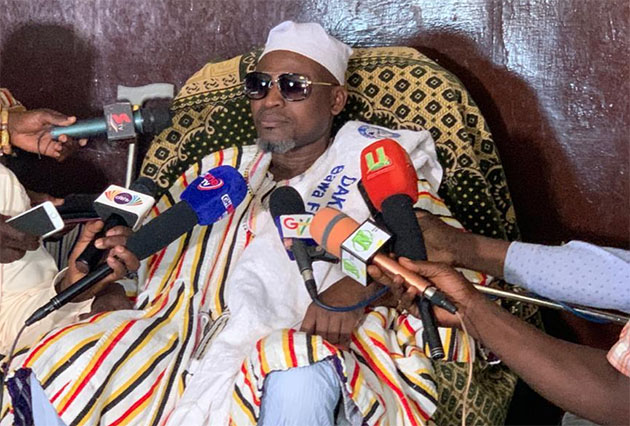 The Tamale Chief, Nyab Dakpema Naa, Fuseini Bawa has sent a strong warning to the youth of Tamale in the Northern Region to desist from attacking government institutions.

According to him, any person or group of persons arrested for engaging in such an act will be punished severely by the palace before handing them over to the police for prosecution by the law.

Nyab Dakpema Naa urged residents in the region to engage with state institutions when they have challenges instead of taking the law into their own hands.

He called for calm between the youth, NEDCo and police adding that there can not be development without peace in the region.

Nyab Dakpema Naa appealed to NEDCo to work on communities in the region that have been cut off from the national grid for days.

The Tamale chief called on residents in Tamale to give NEDCo the necessary support when they start operations.

“ We need peace in Dagbon so from tomorrow NEDCo will start working so I am appealing you everybody in Tamale to ensure that NEDCo work in peace for the development of this place if tomorrow I hear that any person attacked the NEDCo staff during their operations the palace will deal with that person severely.”

Some residents in Tamale embarked on a protest to register their displeasure over the brutality meted out on them by some police officers attacked the Lamashegu Divisional Police Command.

On September 21, 2021, some residents of the Tamale metropolis were allegedly assaulted by police personnel for illegal electricity connections.

A viral video sighted by DGN Online showed how customers who were alleged to have engaged in the illegal connections were assaulted with objects and were physically manhandled by police officers.

EC accusations: Leave it for the serial callers