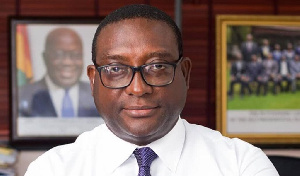 Director of Communications of the governing New Patriotic Party (NPP), Yaw Buaben Asamoa, has condemned the destruction of belonging to his party by some person believed to be members of the NPP following the announcement of the list of the Metropolitan, Municipal and District Chief Executives (MMDCEs).

He explained that nomination of persons for the position of MMDCEs is not a partisan political action for which a particular political party should be attacked by disappointed individuals.

The former lawmaker for Adentan said these on the ‘Pae Muka’ Show with host Yaa Titi Okrah on Onua FM/TV on Monday, September 27.

“The damage to the properties is unfortunate and needless,” he said.

“Why will anybody destroy the properties of the party when the exercise is nonpartisan as I have explained,” he added.

“You have the right to express your views or disappointment. You can write a letter to the president, you can demonstrate but don’t destroy or attack anybody. That will be in violation of the law.”

Following the release of the list of the MMDCEs by Local Government Minister Dan Botwe on Sunday, September 19, some youth engaged in disturbances in parts of the country including Odododiodoo and Chereponi.

In the case of Ododiodoo, four of the ringleaders were subsequently arrested by the police, for creating “a sense of fear and disorder.”

The police said their preliminary investigations suggested that the youth, believed to be members of the NPP, were protesting in anticipation of the list of MMDCEs to be released on Sunday, September 19.

Twelve others in Chereponi were also arrested for their alleged role in the disturbances in the area on Sunday, September 19 following the nomination of Zuwweiratu Mada Nashuru as the District Chief Executive.