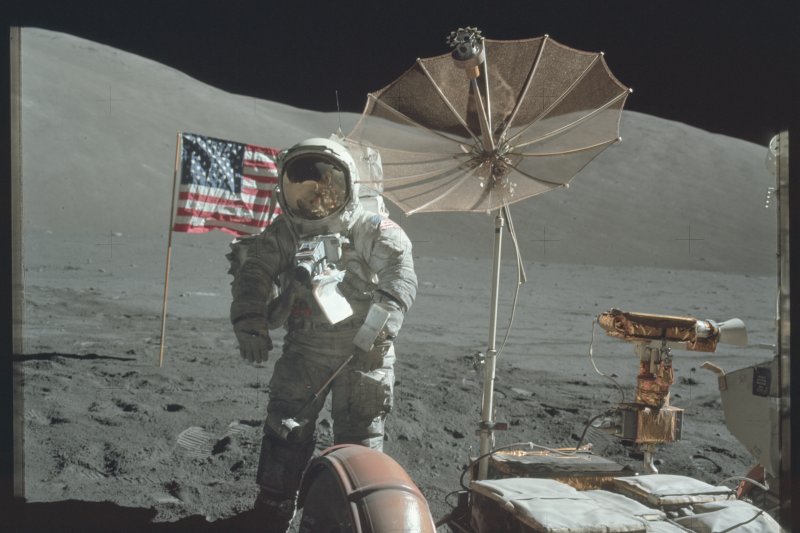 Sept. 28 (UPI) — A long-lost moon rock presented to the state of Louisiana by NASA after the Apollo 17 mission in 1972 has been returned to the state by a Florida man who purchased the plaque to use the wood for gun repairs.

The Florida man, who chose to remain anonymous, said he frequently buys plaques at garage sales and thrift stores to use the wood for gun stock repairs, and he was recently going through one of his boxes of plaques when an unusual item caught his eye.

The plaque contained an odd stone, and the inscription on the metal plate told its story: “This fragment is a portion of a rock from Taurus Littrow Valley of the Moon. It was part of a larger rock composed of many particles of different shapes and sizes, a symbol of the unity of human endeavor and mankind’s hope for a future of peace and harmony.”

The rock had been collected by astronauts on the Apollo 17 mission in 1972 and was presented to the state of Louisiana by NASA once it was brought down to earth.

The Florida man said he likely purchased the item at a garage sale at some point in the past 15 years.

“I can’t even tell you how long I owned it for,” he told collectSPACE.com. “I’m not even sure how much I paid for it. I buy plaques because I take the wood from the plaques and I send it over to my gunstock guy and he makes grips for my Colts and so forth.”

“They wanted me to mail it out to them,” the man said. “I said, ‘I’m not mailing this thing out to you. I will hand deliver it,’ and with that said, that is what I did.”

“He did indeed hand over the moon rock to the museum,” said Steven Maklansky, interim director of the Louisiana State Museum. “We did take possession of the rock.”

Maklansky said researchers do not know how the plaque ended up for sale in Florida.

“I think it is an extraordinary piece of Louisiana history. Obviously then, Louisiana State Museum would be a fitting venue for it to be held for posterity and also offered for public display,” he said. “We’re excited to take possession of this piece and to share it with our audiences.”

The rock was the second and final lunar sample presented to the state of Louisiana. The first, from the 1969 Apollo 11 mission, was also considered lost for decades, but was rediscovered in 2018 in the collection of the Louisiana Art and Science Museum in Baton Rouge.