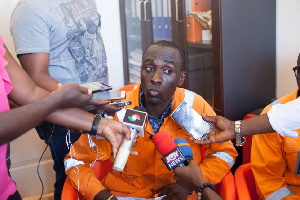 Ernest Owusu Bempah is a convenor of ‘Fixing The Country Movement’

Convener of the ‘Fixing the Country Movement,’ Ernest Kofi Owusu Bempah has called on the Inspector-General of Police (IGP) to immediately arrest and investigate some media personnel and individuals who did not take time to find out the truth about Josephine Panyin Mensah and her fake pregnancy and kidnapping case before drawing conclusions.

He expressed worry about how the media which is the 4th arm of the government did not exhibit utmost professionalism but acted hastily to condemn and recklessly seek to blame the government without evidence.

According to the movement, the purported Takoradi pregnant woman brouhaha is a strategy adopted by the opposition NDC to run the ruling government down.

Mr. Owusu Bempah made the call while addressing journalists in Accra. He urged the media to desist from false reportage which is likely to incite people.

The ‘Fixing the Country Movement’ also called on the judiciary to fast-track the proceedings and hearings of the audio of the National Chairman of the NDC, Ofosu Ampofo’s alleged plan against the EC Chairperson among others.

He said criminal demeanour should be treated with the seriousness it deserved by assessing its social impact and apportion punishment as the law demands.

The movement said the impression of impunity created may encourage others to replicate the same.

Mr. Owusu Bempah urged the NDC to desist from unnecessary propaganda in its desperate desire for power since such acts can lead to chaos in the country.