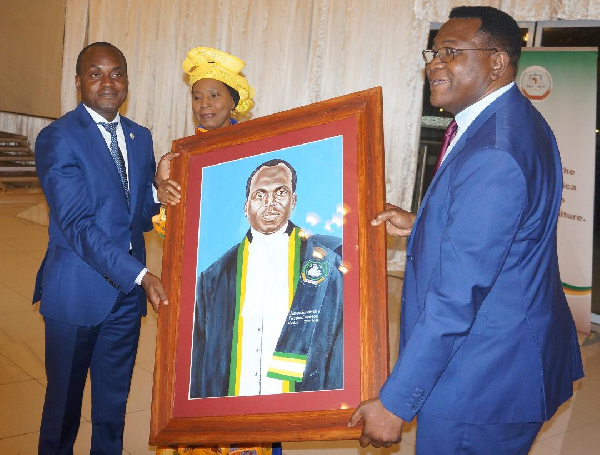 Lady Justice Imani D Aboud, President of the African Court on Human and Peoples’ Rights, has lauded the efforts of the predecessor Justice Sylvain Oré, under whose tenure the African Court made the most tremendous achievements.

“It is indeed under President Oré’s leadership that the African Court attained its highest productivity, obviously negotiating significant increases in both the duration of sessions, and financial resources allocated by the African Union.

“Human resources capacity of the African Court also grew with a particular attention given to the legal personnel who implement the core activities of the institution in addition to improved working conditions of Judges,” Lady Justice Aboud stated during a farewell ceremony organised at the weekend at Arusha, Tanzania.

“Justice Oré devoted an outstanding commitment to seeing the African Court face some of its greatest challenges, which manifested during both his two terms in a complex cooperation with states.

“In the face of the wave of states withdrawals from the African Court, it is only fair to praise President Oré and his team for earning the institution more ratifications and more declarations due to the incessant visibility work deployed over the past four years,” the African Court President stated.

Lady Justice Aboud noted that visibility of the African Court was indeed at the heart of Justice Oré’s presidency as witnessed by such achievements as a wider human rights media networking, a larger pool of well-trained counsel registered with the African Court.

“Justice Ore adopted an innovative law reporting system, as well as an emerging and state of the art digitization of case work processes,” she noted.

Other achievements also include improvement of operational effectiveness of the African Court’s registry; setting up greater staffing as well as courageous administrative decisions, which resulted in the registry implementing a result-oriented approach to support the work of Judges as the labour power house of the institution.

“The President Oré that we know is also the one with a humane figure; characterized by an obsession to inclusiveness as well as a constant openness to entertaining difference in opinions.

“He was also very much prone to reconciling divergent viewpoints whether in legal opinion making or merely administrative management. Such qualities cannot be taken for granted, which is why we are here to celebrate his legacy to the African Court,” Lady Justice Aboud stated.

The farewell ceremony was attended by Justice Blaise Tchikaya, Vice-President of the Court; Judges of the Court; the Registrar and Deputy Registrar; Senior officers and staff of the Registry, African Union representative and other distinguished legal practitioners from Arusha, Tanzania.

A plaque with the image of Justice Ore embossed on it was presented to him as recognition of the valuable service to Africa Human rights jurisprudence and the African Union architecture.