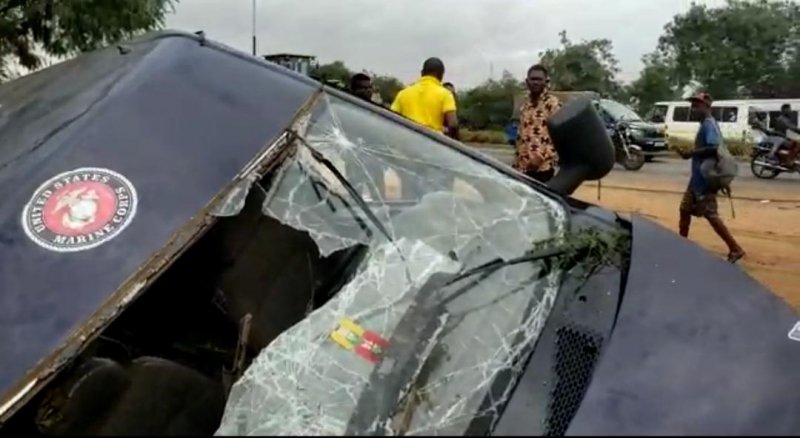 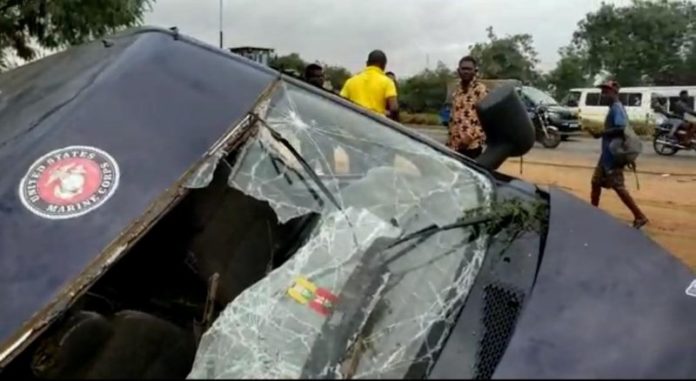 Some 15 passengers onboard a Battor bound Ford Transit mini bus sustained several degrees of injuries when the vehicle skidded off the road near Kpone barrier and landed in a drain.

The victims, who are in a stable condition, are receiving treatment at the Tema General Hospital after being rescued and rushed there by Ghana National Fire Service officers.

ADO II Nanor said the vehicle was from Accra heading towards Bartor when the crash happened, saying that no fatalities were recorded and the victim mostly sustained injuries on their legs.

He said though the driver’s conductor of the minibus was available for questioning, the whereabouts of the driver was not known as he was nowhere to be found at the scene.

Meanwhile, some witnesses believed that the crash might have been caused by brake failure as they said they saw the vehicle which was on top speed suddenly veering off into the drain.

Some of the witnesses noted that while they rushed to the scene to help rescue the victims, the driver alighted from the vehicle through the window, put his hands on his head and started crying, then bolted.

The Motor Traffic and Transport Department (MTTD) of the Ghana Police Service data indicates that 16,226 vehicles have been reported between January 1 and July 31 this year, with 1,706 persons killed and 9,299 others injured in those accidents.

He said the current driver behaviour and its associated high rate of road crashes and attendant deaths, injuries of all kinds and destruction of property had placed a huge responsibility on all to work together for a common good.

Supt Obeng consequently called on stakeholders in the road transport industry to join the police to find a lasting solution to the carnage on the country’s roads.