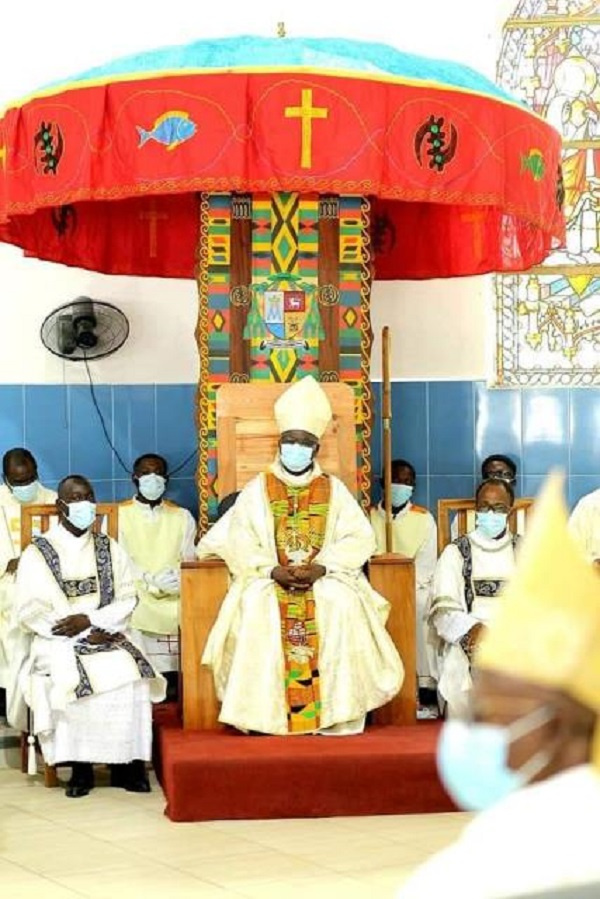 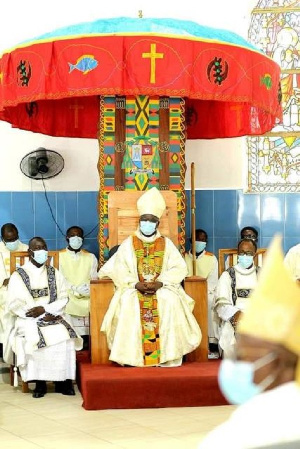 A solemn ceremony was held at the Our Lady Star of the Sea Catholic Cathedral in Takoradi to mark the Episcopal ordination and installation of Most Reverend John Baptist Attakruh as Bishop of the Sekondi-Takoradi Diocese.

He is the fifth Bishop of the diocese which was created by the Holy See on 20th December 1969 as a territory detached from the Archdiocese of Cape Coast.

The solemn celebration started with the presentation of the Bishop for ordination by two Priests, after which the Papal Bull appointing Bishop Attakruh as the Chief Shepherd of Sekondi-Takoradi was read in Latin and Fante.

The new Bishop was presented with the Book of the Gospels and his head anointed with chrism, followed by the investiture of His Symbols of Office, a Ring, Mitre, and Pastoral Staff.

The Apostolic Nuncio was assisted by Archbishops Naameh and Kwofie to place Bishop Attakruh on his Cathedral or throne amidst applause.

He was welcomed into the fraternity of Bishops with a bow from his colleagues. Priests and Religious paid homage to him while dignitaries at the ceremony congratulated him.

In a homily, Most Rev Charles Gabriel Palmer-Buckle, Archbishop of Cape Coast, said the new Bishop was a Mystery gift from God to the Bishop himself, the church, diocese in particular, and the nation in general.

He asked him to take heart and not be afraid and continue to love the church, feed and tend the “sheep of God” with love as Christ Jesus asked Simon Peter to do.

Archbishop Palmer-Buckle urged him to be a shepherd to the people of God, the church, and diocese of Sekondi-Takoradi and resolved as a good shepherd to seek out the sheep that stray and gather them into the fold of the Lord.

“Guide, guard and protect the Diocese in the way of salvation and against any form of evil and feed the people with the word of God at all times”, he added.

“The evil one will always try to mess with you, but I pray that you shall always overcome.”

Archbishop Palmer-Buckle asked the priests, religious and lay faithful to welcome the Bishop by supporting and assisting him to execute his mandate as the shepherd of the Diocese.

He asked them to pray for him and tasked the Bishop to rekindle the spirit of faith, love, and hope in the people to build the Diocese together peacefully.

The Apostolic Nuncio Jagoddgzinski in a goodwill message, described Bishop Attakruh as his first son since he was the first to be ordained by him and told the new Bishop to be a Bishop for the present and future, adding that ” I know it is not easy to be a Bishop but with God’s blessing you will be able to shepherd the sheep of Christ”.

Most Rev Philip Naameh on behalf of the Catholic Bishops Conference congratulated and welcomed Bishop Attakruh to the fraternity of the conference and pledged their spiritual support to him to begin his Episcopal journey.

He described him as a mystery gift to the church and called on the priests, religious and lay faithful to collaborate and support the Bishop in his Episcopal journey.

Most Reverend John Baptist Attakruh expressed his gratitude to Apostolic Nuncio Henryk Jagodzinski and the Bishops who graced the occasion for their prayers and support and pledged to be a good shepherd to the flock of the Lord.

He called on the priests, religious and lay faithful to be the yeast in the dough, salt, and light of the world and be true servants to serve the common good of Ghanaians.

Until his appointment as Bishop, Bishop Attakurah was the Apostolic Administrator of the Sekondi-Takoradi Diocese.

He was born on 13 October 1957 at Juabo in the Amenfi Central Municipality of the Western Region.

He entered St Teresa’s Minor Seminary in Amissano near Elmina for his secondary education from 1972 to 1979.

He joined the Society of Jesus ( the Jesuits) of the New York Province and had his novitiate formation in Benin City, Nigeria from 1980 to 1982.

He proceeded to Institute de Philosophies, Saint Pierre Canisius in Kinshea in the Democratic Republic of Congo from 1982 to 1985.

After his philosophical studies, he returned to Ghana and undertook his theological studies at St Peter’s Regional Seminary Pedu, Cape Coast as a seminarian of the Catholic Diocese of Sekondi-Takoradi from1985 to 1989.

He obtained a Diploma in Theology from the University of Ghana Legon in 1987.

Most Rev. Attakruh was ordained a priest for the Catholic Diocese of Sekondi-Takoradi on Sunday 39th July 1989 by the late Most Rev. Charles Kweku Sam.

His first appointment was to the Immaculate Conception Parish, Asankragwa as an Assistant priest.

The Sekondi Takoradi Diocese since its creation has had five Bishops, Most Rev. Joseph Amihere Essuah, Most Rev Charles Kweku Sam, Most Rev. John Martin Darko all of blessed memory, Most Rev John Bonaventure Kwofie, and now Most Rev. John Baptist Attakruh.

The occasion was graced by Archbishops and Bishops from all the Catholic dioceses in the country, representatives from the Methodist and Anglican Churches, Government officials, the Muslim community, Chiefs and Queenmothers and lay faithful from the Sekondi-Takoradi Diocese.