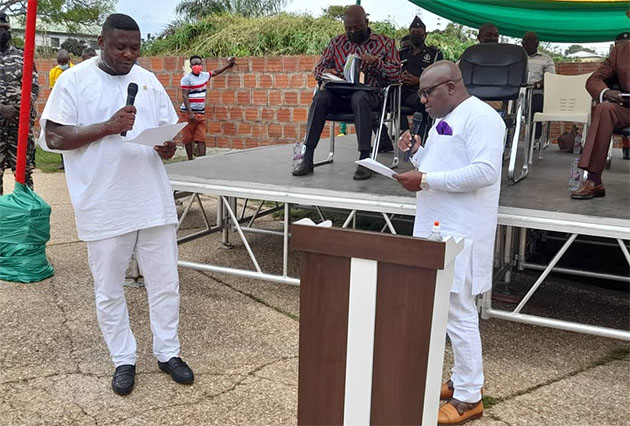 The DCE, Dan Kenneth left taking the oath of office by the Regional Minister, Seth Acheampong

The Assembly Members of the Okere District in the Eastern Region have confirmed Daniel Kenneth Addo,  the President’s nominee for the position of District Chief Executive (DCE),

After successful polls conducted by the Electoral Commission, the 30 Assembly Members present voted yes, representing 100% of the total votes cast.

Prior to his nomination and subsequent confirmation, Mr. Addo was the District Chief Executive for the same Assembly during the first administration of President Akufo-Addo.

The Election was conducted by the District Electoral Officer, Theresa Carrey, following which Daniel Kenneth Addo was officially sworn into office by the Eastern Regional Minister,  Seth Kwame Acheampong.

In a brief statement, Mr Addo thanked President Nana Akufo-Addo for the trust reposed in him by nominating him to represent him for the second time, the Assembly Members,  Staff and, the general public for the love and support received in the past and expressed hope of an improved relationship between them in his second term.

The Local Government, Decentralisation and Rural Development Minister, also the Member of Parliament for the area Dan Kwaku Botwe, expressed gratitude to the assembly members for fully endorsing the DCE by accepting work with him.

He tasked them to rally behind the government to work hard and achieve its aim.