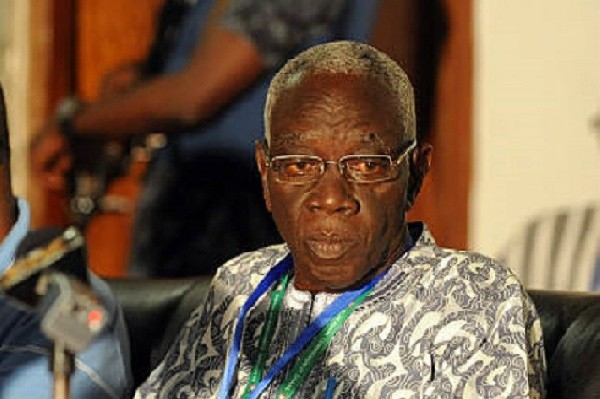 • The NDC wants some reforms in the electoral system of Ghana

• Dr. Kwadwo Afari-Gyan believes this will interfere with the work of the EC

The longest-serving Chairperson of the Electoral Commission in the history of the country, Dr. Kwadwo Afari-Gyan, has said that the proposal to have the Inter-Party Advisory Committee (IPAC) backed by law is one that he disagrees with.

He explained that this would interfere with the independence of the EC as IPAC is a mechanism through which political parties offer suggestions to the body, reports graphic.com.gh.

There have been suggestions mainly by the opposition National Democratic Congress for some reforms to be made in Ghana’s electoral system.

Instrumental in the formation of the IPAC, Dr. Afari-Gyan explains why that arrangement could be catastrophic.

“The Constitution clearly says that in doing its work, the EC should not take instructions from any person or body external to the commission. The IPAC is such a body. Accordingly, IPAC decisions cannot be binding on the EC. If they were, it would, in effect, amount to nothing less than meddling with the independence of the commission,” he said in a statement he sent to the Daily Graphic detailing his views on the proposals by the NDC.

The opposition National Democratic Congress (NDC) has put forward another set of electoral reform proposals for the action of the Executive, Legislature and bodies other than the Electoral Commission of Ghana.

This comes after the party made initial six proposals for electoral reforms on May 20, 2021, during a press conference they dubbed: Assessing the so-called achievements and electoral reform proposal by the Electoral Commission of Ghana.

Those proposals came by way of an immediate reaction to the adoption by the Inter-Party Advisory Committee (IPAC) and the Electoral Commission some electoral reforms which included closing polls at 3:00 pm, a continuous voter registration exercise, an all-year-round voter exhibition exercise through the use of technology (SMS shortcode), among others.

The NDC, which had not participated in the IPAC meeting at the time, raised concerns about the proposals, rejecting some, especially the proposal to close polls at 3:00 pm.

In furtherance to that, the party in a stakeholder engagement made the following proposals and justified same;

Provide for prior parliamentary approval for the appointment of EC members: The NDC is of the view that the current mode of appointment of the Electoral Commission appears to be partisan and does not involve the representatives of the people of Ghana (Parliament). They contend this does not allow the commission to be as independent, neutral and credible as it ought to be.

Thus, they want the appointment of the EC members to be like that of Justices of the Supreme Court which involves prior parliamentary approval. According to the NDC, the Constitutional Review Committee(CRC), of which the current EC Chairperson, Jean Mensa, was a member, recommended prior parliamentary approval for the appointment of EC members and that the Government White Paper on the CRC Report accepted the recommendation.

“A person shall not be prosecuted for an offence under this Act without the consent in writing of the Attorney-General, except that this section shall not prevent a person being

(a) charged with that offence, or

(b) arrested with or without warrant in respect of the offence, or

(c) remanded on bail or in custody in respect of the offence, without the consent of the Attorney-General.“

This, the NDC claims has often being used by the police as “an excuse for the non-prosecution of high-profile electoral offence cases” which they say “creates a culture of impunity and undermines fairness and credibility of Ghanaian elections”. Again, they say the AG as a political appointee finds it difficult to consent for the prosecution of offenders who are his colleague ministers or party members. This proposal, according to the NDC was first made by the EC’s own Electoral Reforms Committee in 2015.

Special Courts to handle election-related offences: The NDC wants specially-designated courts that will be appointed exclusively for electoral disputes and offences before, during and after registration of voters and elections. In their view, this will reduce or at best, do away with the “undue delay in the adjudication of electoral disputes and offences in Ghana” and also encourage the courts to specialise in election matters. They believe the move will also prevent situations where an illegitimate President will be being in office for too long or an illegitimate MP representing the electorate due to protracted litigation.

EC should resort to Court to clean voters register: The NDC proposes that the EC be allowed by law to apply to the courts to remove names of deceased and other unqualified persons from the provisional register when informed by the relevant authorities. According to them, what currently exists allows only registered voters to object to the inclusion or exclusion of any voter in the provisional register. This proposal, they say, is the universal practice that they believe will allow for the register to be more effectively cleaned up.

State Broadcaster to provide equal access to all political parties: The NDC wants the state broadcaster, Ghana Broadcasting Corporation (GBC), to be made to comply with the provision of Article 55 (11) of the Constitution of Ghana, 1992, as was held in the Supreme Court decision in New Patriotic Party v. Ghana Broadcasting Corporation [1993-94] 2 GLR 354. Article 55 (11) states that:

They believe the proposal when implemented will ensure an even playing field and an equitable access to state-owned media which is funded by the taxpayer.”

IPAC should be backed by legislation: The opposition NDC wants the Inter-Party Advisory Committee (IPAC) to have legal backing through an amendment to the Electoral Commission Act, 1993, Act 451. They want the amendment to spell out the composition of IPAC and its functions, a proposal said to have first been made by the EC’s own Electoral Reforms Committee in 2015, adopted by the IPAC and accepted by the EC.

The other proposals include;

Spelling out by law the security responsibilities of the EC (if any), the police and the military during registration of voters and during and after voting.

Legislation should bind the Chairperson of the EC as the Returning Officer of the Presidential Election to afford the agents of the participating political parties and candidates full participation in the collation of the Presidential Election results at the EC’s National Collation Centre The EC must by law be made: a mandatory party to all parliamentary election petitions just as is the case in Presidential Election petitions, a compellable witness to produce all public election and related material and documents relevant to presidential and parliamentary election disputes; Split the EC into two separate bodies namely an Office for the Regulation of Political Parties (ORPP) and an Electoral Commission (EC) by amending the Political Parties Act, 2000, Act 574.