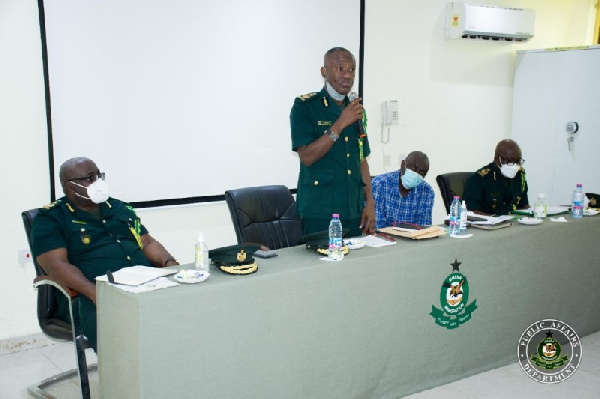 The Comptroller-General of Immigration, Mr Kwame Asuah Takyi, has called on retired and serving officers of the Ghana Immigration Service (GIS) to be circumspect in relaying information about the Service and support the initiatives for its growth and staff wellbeing.

Mr Takyi made the call when he met with the Association of Retired Immigration Officers in Accra.

He made a presentation on the Transformational Agenda currently ongoing in the GIS including infrastructure and administrative improvements over the last four years, which are making the GIS a force to reckon with.

Mr Takyi mentioned the increase in recruitment levels, which had more than doubled the staff strength, acquisition of residential accommodation, renovation of both office and residential facilities, and expansion works at the Immigration Service Academy and Training School.

He also touched on increase in the fleet of transport, establishment of a clinic, clearing of backlog of promotions and formulation of policies to guide the Service to deliver on its mandate.

He called on the retired officers to support the Service with their years of experience to better its lot.

Mr Laud Affrifah, the Deputy Comptroller-General responsible for Command Post and Operations, spoke about the preparedness of the GIS to counter the threat of terrorism in the country.

He said that could be done through the beefing up of border patrol officers and creation of more sector commands with inland check points along strategic routes.

The President of the Association, Deputy Director in charge of Operations (Rtd.) Mr Moses Gyamfi, congratulated the Comptroller-General and his Management Team for sustaining and growing the image of the Service.

He said the GIS had become a household name and more recognised within the security apparatus of the country than before.

He expressed the hope that the trend would continue for better progress and more projects to be accomplished to improve the living standards of both serving and retired officers.

‘Killer lamps’ removed from 1,418 vehicles in one week