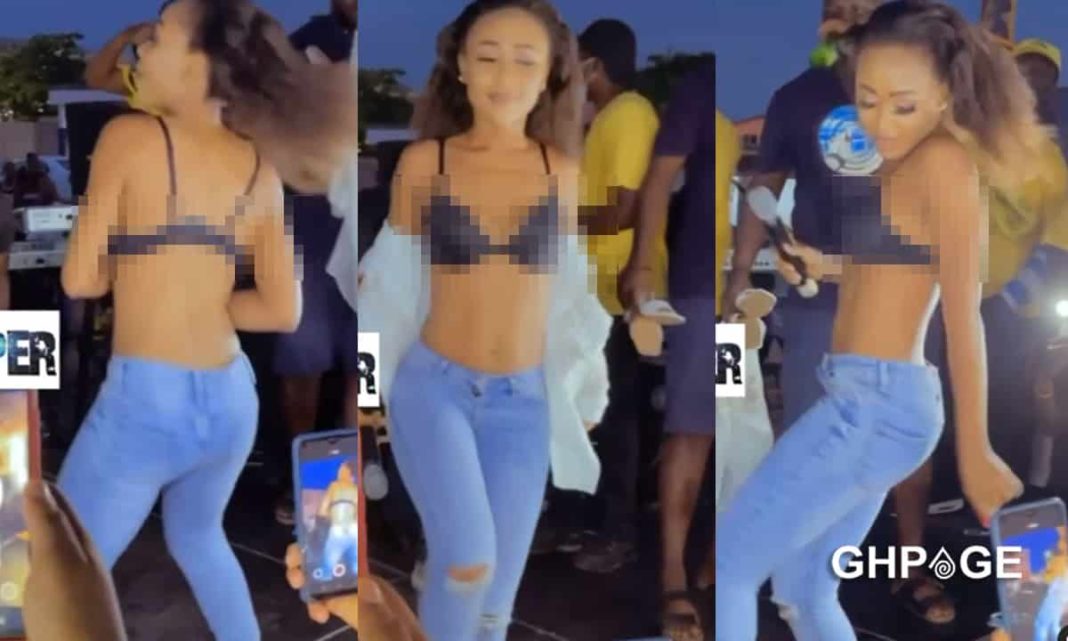 Rosemond Alade Brown, popularly known as Akuapem Poloo, went topless when she mounted a stage to entertain revellers at an event that took place at the weekend.

In a video sighted by , the actress was seen whining her waist vigorously and twerking energetically in front of a group of people who recorded while they cheered her on to do more.

Akuapem Poloo graced the event modestly adorned in a white long-sleeved shirt which she paired with blue jeans.

But the self-obsessed ‘Cardi B twin’ seems to have been carried away by the excitement that made her unbutton her shirt and expose her black bra holding her boobs in place.

Akuapem Poloo gave the paparazzi more than what they bargained for as she completely took her shirt off to bust some dance moves.

Poloo’s public appearance and body-exposing dance come a day after Kumawood actress and singer Yaa Jackson went braless on stage to perform to a rapturous crowd in Tema.

She appeared on stage in a skimpy blouse with a daringly low neckline that left both her breasts wiggling in every direction one can think of.

Jackson, who left her bra at home, obviously came prepared to give the crowd a free show by letting her boobs come out to play. Her nipples were the only thing concealed with yellow nip pasties.

It looks as if these celebrities just don’t care about their modesty anymore.