Quick recovery of economy from covid, number one priority of Government 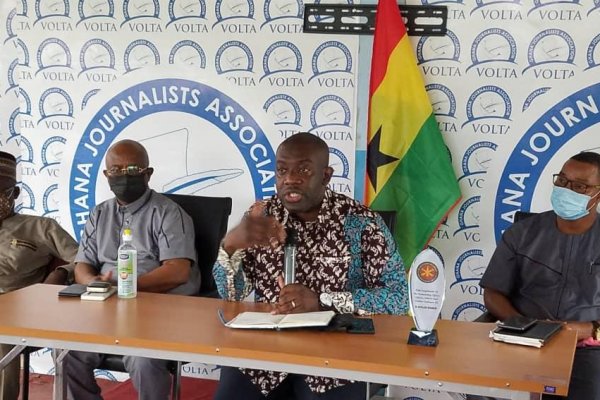 Ho, Sept 25, GNA – Mr. Kojo Oppong Nkrumah, Minister of Information, has said government’s topmost priority was economic recovery from the coronavirus pandemic and called on the media to offer the needed support.
He said the coronavirus pandemic had affected the Nation’s economy, and that as the construction of the Executive arm of Government was being completed with the nomination of heads of the Local Assemblies, economic recovery was being tackled head-on.
The Minister was addressing media practitioners in the Volta Region at the Volta Press Center in Ho on Friday, as part of a nationwide duty tour.
He said as indispensable stakeholders, the media must help the government realize its objectives of vaccination against the coronavirus disease, which was the initial step towards recovery.
Mr Oppong-Nkrumah said the media must meet the government’s efforts with sensitization against vaccine intolerance, and assured that plans towards the inoculation of 20 million Ghanaians progressed smoothly, adding that the local production of the vaccines would soon become a reality.
“Covid has had a very negative impact on the Ghanaian economy, and the objective of government, therefore, is to very quickly recover his economy from the ravages of covid, why? So that we can bring back growth, attendant to the growth are the jobs that we are looking for, attendance to the jobs are the incomes
“And when people have jobs and incomes, quality of life becomes better than it used to be previously”, he said, noting that over one million Ghanaians have already been vaccinated.
The Minister said the media’s role would also be paramount in ensuring that the government’s plan to inject 100 billion cedis into the economy under a program known as the Ghana Cares Obaatanpa Programme, met its intended purpose of stimulating growth within the private sector.
He said the said gains could only be realized when the participation of the private sector was speedily and smoothly facilitated, and so, media support was needed in encouraging the public sector to play its role.
“We are finding, that the country needs to do a lot more to help people who want to invest and do business, quickly onboard their businesses. People need business operating permits, electricity, transformers, people need tax clearance certificates, and people need GIPC registration.
“We are finding that sometimes it is we in the public sector who frustrates the efforts of the investors, land permits etc. And so, government wants to call on you and the Ghanaian public and the public sector that we should step up our efforts at helping private investors to quickly onboard their investments.
“Because we are entering an era, that in the medium term, about 70 per cent of the resources required to eject recovery is going to come from the private sector. So if we keep our same old attitude where we frustrate private sector investments, we will not see the onboarding as quickly as possible,” Mr Oppong Nkrumah stated.
He said President Akufo Addo had himself interrogated the speed with which companies onboard, and that “we need to do a lot more and to work a lot faster than we are, else some of our neighbouring countries that may be doing this faster would attract these same, particularly foreign investors and we will still be here worrying about why the recovery is not coming quickly as possible”.
The Minister further appealed to the media to help sustain adherence to the coronavirus protocols “because breakthrough infections persist despite vaccines”.
Mr. Oppong Nkrumah announced a government-sponsored initiative for the media, which includes a “coordinated mechanism for the safety of the journalist” to train the media to protect themselves and to also sensitize the public to appreciate the role of practitioners.
He added that a media capacity investment program would “mobilize support from academia and civil society organizations that provide training for journalists for continuous capacity enhancement.
- Advertisement -