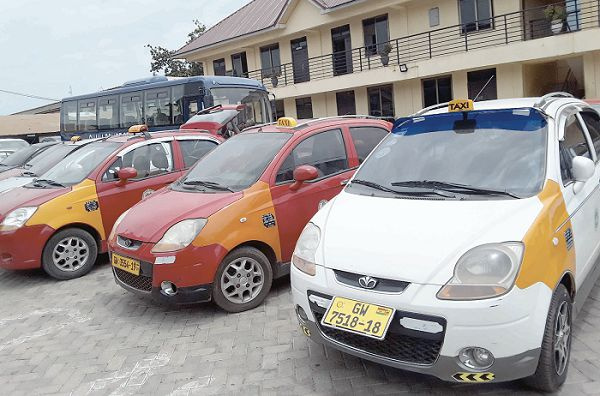 File photo of some parked taxis

The General Manager of the Ghana Cooperative Transport Association, Daniel Yaw Amponsah, has posited that the ‘No Taxis Allowed’ inscription hung at the premises of some state and international institutions has given ride-hailing services a competitive edge over them.

He admits that their yellow fenders which sought to distinguish them from other road users is now preventing them from driving their passengers to certain places, “and that is our problem.”

Per his investigation, the ‘No Taxis Allowed’ inscription was introduced because these institutions fear taxi drivers will transport criminal figures to their premises. “They say that the driver will deny knowledge of knowing the passenger.

They also argue that drivers cause noise pollution by tooting their car horns. If it is about noise, they should just tell us to stop tooting and stop treating commercial drivers as 2nd class citizens.”

He added that most taxis used for crimes are snatched from the drivers and defended, “our drivers are not criminals.”

Ride-hailing services are apps that connect passengers and local drivers using their personal vehicles. In most cases, they are a comfortable method for door-to-door transport.

The apps typically use your phone’s GPS to automatically determine your pick-up location, while the destination is manually input.

Most of the apps also allow riders to rate their drivers.

Taxi drivers are subject to strict background checks and need special insurance on their cars, while ride-hailing services have much lighter standards for both of those.