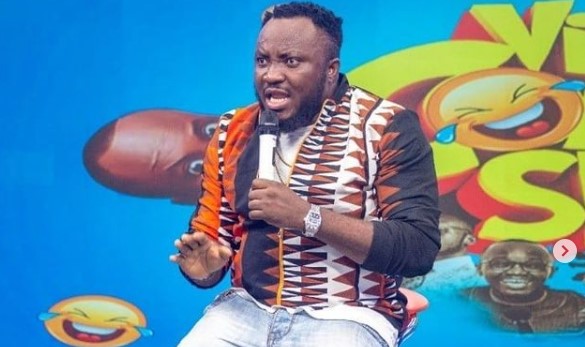 DKB has blown hot in a new Twitter update as he descended heavily on those who slammed him for going blunt on the Psalm Adjeteyfio issue.

The renowned comedian whose name is an acronym of Derrick Kobina Bonney stated at the beginning of the video attached to this report that he’s profusely remorseful for his comment which was even misconstrued after which he thanked all those who stood solidly behind him when the ignorant people were slamming him.

At the tail end of the video, he hurled obscenities at those who slammed him saying he’ll continue to speak up his mind no matter what.

Recall that amongst another thing, DKB had told the veteran actor thus; “Please the GH¢20,00 if you are close to him, let him know that it is investment money, not money to live off… it’s enough embarrassment to come out and be talking about him needing help, calling people for help and doing interviews. It’s disheartening because it makes Creative Arts look bad.

Now that he’s had 20, 000 he must invest it. He shouldn’t invest in transport or hospitality, he will regret it. He should invest in basic necessities, simple waakye and koko (porridge) business. He has a brand name that is active, he can make it TT waakye business and TT Sobolo business and people will support.”

Fast forward, DKB said those who got offended by his advisory comment to Psalm Adjeteyfio a.k.a TT don’t reason at all.