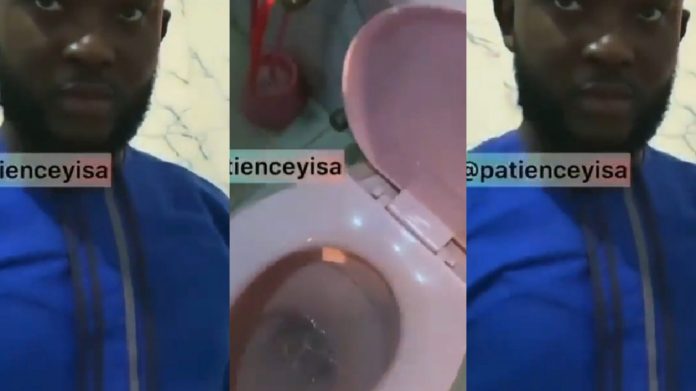 A man’s spontaneity when his wife caught him speaking to his side chic has left the internet bemused with his unorthodox reaction.

The good looking man sneaked into the washroom to receive his call when his bedwarmer of a side chic called him for a romantic chat. His wife who apparently smelled the rat searched for him everywhere and later found him inside the washroom speaking inaudibly to his secret lover.

Torn between losing his side chic and wife, the man did the unthinkable by flushing the phone. Yeah, just like that! His action has sparked massive reactions online and we guess you might add yours in the comment section of our Facebook page.

Watch the video by clicking here…

In other news, another slay queen sleeping with a married man was caught in the usual embarrassing situation but the villain herein almost lost her life trying to escape the same web she wove for herself.

The lady as captured in the video you’ll watch in a jiffy jumped from the high building despite the risk involved and landed right on top of some cars packed below the building, causing severe injuries.

She landed with a heavy thud and predictably the car got damaged owing to the severe impact. She also got paralyzed momentarily as she broke her back which immobilized her.

In fact, it’s a very sad spectacle as depicted in the video here.