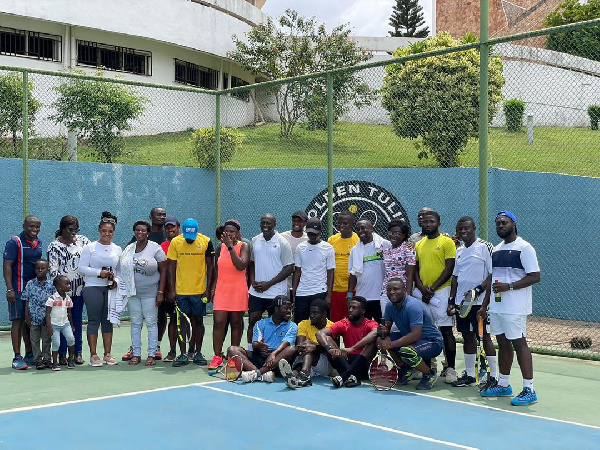 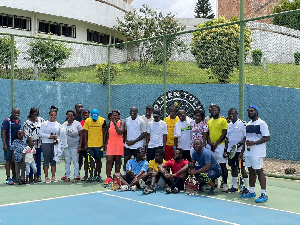 Players from Pulse Fitness and Our Lady of Grace Tennis Club

The host, Pulse Fitness Tennis won three singles and four doubles as against two wins in the singles and two doubles by the away team to ensure a comprehensive triumph by the home team.

The game which was aimed at strengthening the already existing cordial relationship between the two clubs saw club President- Eric Botwe who doubles as the business head of Olam Cocoa Ghana set the ball rolling with a 7-2 win over Kennedy Galley. While the club’s Gilma Kutty gave Pulse Fitness Tennis Club their highest score with a 7-0 win over Isaac Karikari.

The tide however changed in favor of Our Lady of Grace Tennis Club as Cosmos Osei defeated.

The doubles followed similar pattern as the hosts ran away with a four wins out of six games. With Eric Botwe and Mariam Mamoud paired to give them their first doubles win as the pair ousted Emmanuel Kofi Asare and Victor Atta Boamah 7-3. Oheneba Appiah Kubi and Gilma Kutty maintained their winning ways as they won 7-3 against Emmanuel Kofi Asare and Rev John Asamoah Boamah.

Kennedy Kusi and Teddy Asare didn’t disappoint the club as they won 7-5 and Anthony Dwumah and Isaac Koomson 7-5.

The visitors bounced back as Kennedy Galley and Cosmos Amponsah outshone Cyrus Amengura and Peter Addo 7-5. There was another win for the visiting team as Anthony Dwumah partner’s Rev. John Asiamah Boamah to win 7-6 against Albert Anokye and Samuel Tetteh Nortey.