I’ve never had a girlfriend; I’m still a virgin 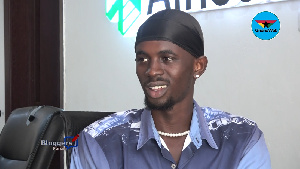 • Rapper Black Sherif says he is still a virgin

• Adding that he has never had a girlfriend

•The 19-year-old rapper is a student at UPSA

Mohammed Ismail Sherif, known in showbiz as Black Sherif, says he has never had a girlfriend.

According to the young and budding rapper, he is still a virgin.

The 19-year-old, in an interview on the Delay Show, stated that one of his biggest fear is expressing his love for a woman as he faced rejection back in Senior High School (SHS).

“The girls have not been moving to me, they don’t come my way, I also don’t like women. Anyone close to me can testify to it. I admire girls but I can’t move to them.

Black Sherif is a student at the University of Professional Studies, Accra (UPSA), where he is balancing studies with his new found love, music.

“I am a brilliant student… I want to get my degree. I don’t think I can work in an office. Way before music, I didn’t see myself working in an office space. I knew I will make music and make money from the streets,” said the ‘Second Sermon’ hitmaker.