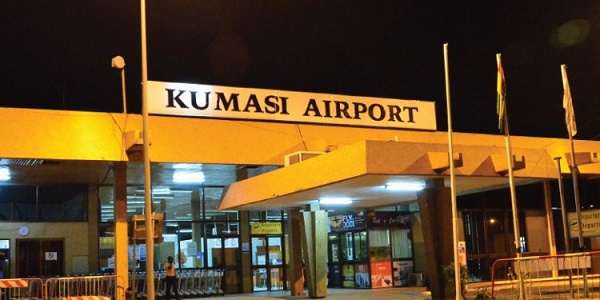 Establishing shot of the Kumasi airport

Joseph Yamin, a former deputy Sports Minister has disclosed how the Kumasi airport came to get a major upgrade as a key air travel facility under the John Dramani Mahama administration.

According to Yamin, it happened in 2014 that the Black Stars needed to catch a flight to Japan but they were in Kumasi where flights could only land and take off at latest by 5 o’clock.

The said match had ended at 6 pm and the team needed to catch a KLM flight in Accra, he told Nana Aba Anamoah on Starr Chat show which aired on Wednesday, September 22.

At the time, a road trip was not an option hence the Ministry called for a military jet and improvised with lanterns as aeronautical lights on the runway to get the team to leave Kumasi and catch their flight.

“Before (previously), you can only fly out or land in Kumasi at 5 o’clock. Ghana played our last match in the 2014 World Cup qualifiers with Zambia, so we were supposed to travel to Japan that night with KLM, KLM leaves Accra at 10 am and the match was supposed to end at 6 o’clock. There was no way we could fly and be able to catch check-in.

“We had to then call for the military jet that flies at half the length of the runway for takeoff. So we had to bring in the military jets and use lanterns, Lanterns were used as lights (on the runway),” he revealed.

According to him, it was after that incident the then-president sought to cure the challenge when he gave the airport an upgrade in terms of the longer runway, aeronautical lighting and subsequently the new terminal.

“That is what John Mahama saw and said Kumasi is an international airport and a plane cannot fly after 5 o’clock. Let me do what they call the aeronautical lighting system. John Mahama did it.

“And today we can land in Kumasi at 8, 11, 12 pm thanks to John Mahama, he didn’t just end it there, he went ahead and started the construction of the terminal to bring it to international standard,” he added.

According to the Ghana Airports Company Limited’s website, in 2003, Kumasi was declared an International Airport primarily for regional operations with the full complement of Security, Customs and Immigration staff.

In December 2014, the newly rehabilitated runway installed with Aeronautical Ground Lighting Systems was inaugurated. This paved the way for domestic airlines to commence night operations..