Gorilla performs oral s3x on his friend at Zoo 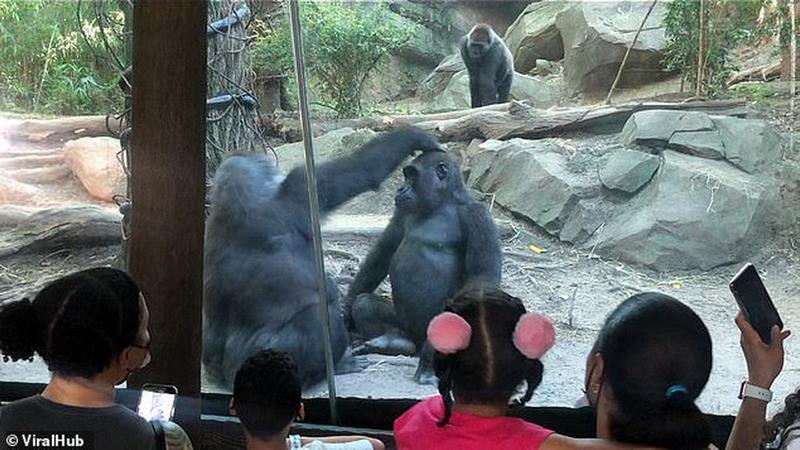 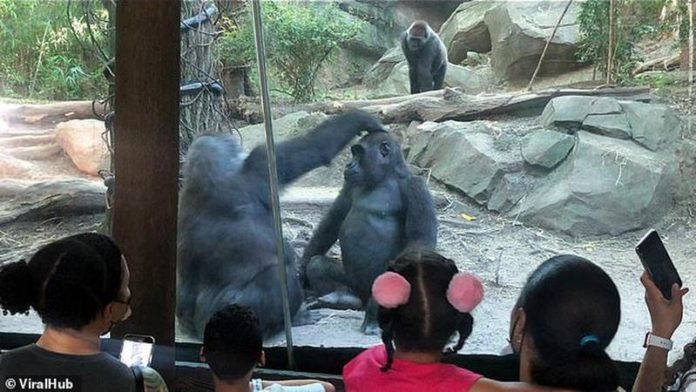 A frisky gorilla at the Bronx Zoo gave onlookers an X-rated show when he performed oral sex on his excited friend in front of a group of zoo-goers.

A father at the zoo with his wife, four-year-old daughter, son and niece captured footage of the NSFW scene, which took place at the NYC zoo’s Congo Gorilla Forest.

It is unclear whether the other gorilla is male or female, with the Bronx Zoo declining to comment further when contacted by DailyMail.com.

“I was shocked and had no idea that was a natural act,” the man, who chose to stay anonymous, told the New York Post.

He added: “My wife had to stay out of the exhibit with my sleeping son, so I wanted to capture a lot of video. Then this magic happened.”

The ‘magic’ he captured on video proved humans aren’t the only ones who get down and dirty for fun.

Adult onlookers gasped, shouted and turned their children’s heads away as the male primate pushed the smaller ape to the ground and serviced it as it closed its eyes and put its hands around its partner’s head while thrusting its hips and curling its toes.

Contrary to what many think, gorillas performing oral sex is quite common throughout the animal kingdom, as reported by The Post, with sightings of cheetahs, bears, bats and other ape species taking part in the racy act, too.

Bonobos have even come to be known as ‘hippie apes’ for their infamously kinky sex lives where they often engage in the act with monkeys of the same sex.

They ‘behave as if they have read the Kama Sutra – performing every position and variation one can imagine,’ Steve D Pinkerton, a professor of psychiatry and behavioral medicine at the Medical College of Wisconsin, confirmed in his book Sexual Nature/Sexual Culture.

According to Discover Magazine, ‘there’s no reason why an animal should seek sex unless they enjoy it,’ and therefore sex is not always simply to reproduce.

In fact, gorillas are ‘most likely to display responses similar to humans,’ meaning that yes, they experience orgasms.

They’re also one of the only other animal species, besides Bonobos and humans, to have sex in the missionary position, according to The Post.