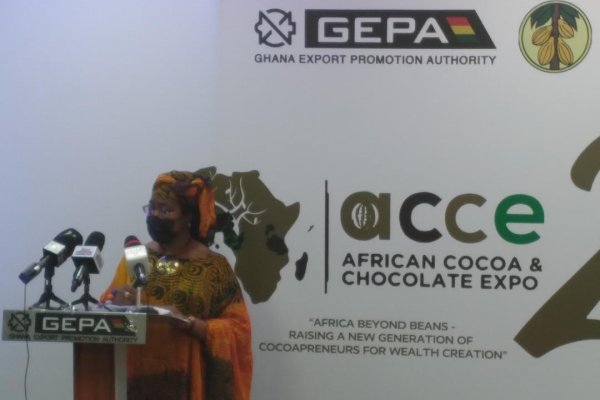 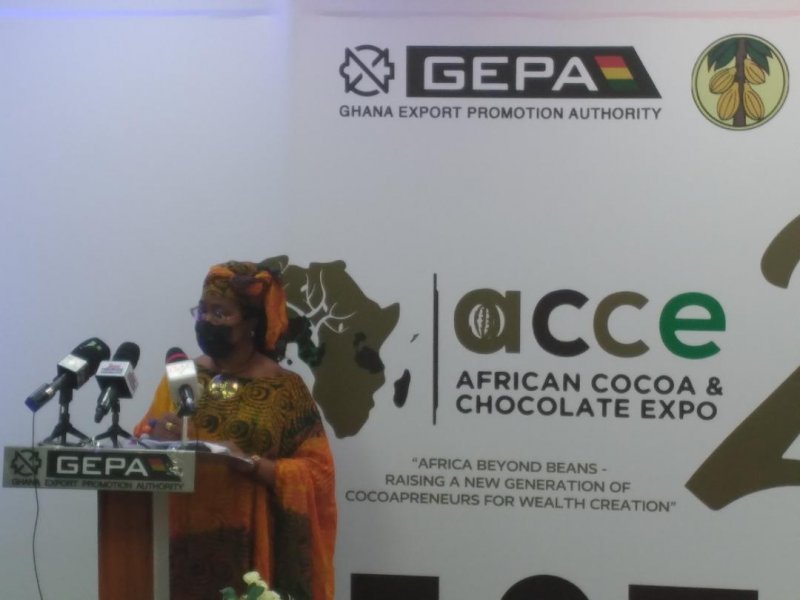 Dr. Afua Asabea Asare, Chief Executive Officer of GEPA, said the Authority would also provide the necessary market facilitation support to see the entrepreneurs break into the competitive markets in Africa and beyond.
Dr Asare was speaking at the virtual opening of the 2nd edition of the African Cocoa & Chocolate Expo (ACCE21) in Accra.
The event was on the theme: “Africa Beyond Beans: Raising a New Generation of Cocoapreneurs for Wealth Creation.”
The event was to draw attention of the Ghanaian public to the need to increase consumption of cocoa products.
Dr Asare said the GEPA also wanted to draw more of the younger generation into the sector, adding that there was a recent sharp rise in the number of young entrepreneurs who were venturing into artisanal chocolate production and other cocoa-based products.
She said it was even more satisfying to see a significant number of young women entering that space.
“All these efforts are being pursued in the context of the implementation of the National Export Development Strategy, of which the cocoa value chain is the key priority,” she added.
She said GEPA was opened to collaborate with interested partners to further open up the cocoa sector to more investments.
The CEO said it was the joint vision of GEPA and Know Your Cocoa Foundation that the ACCE would grow to become a truly African premier and dedicated show for the cocoa value chain, which would be able to rival all other Expos in its category globally.
She said as “we are all aware, cocoa is the leading export product of Ghana and has sustained the economy for more than one hundred years.”
“Sadly, we have not done enough as a country to add value to this valuable crop which is proudly referred to in the past as the ‘food of the gods’,” she said.
She commended Nana Aduna II for his fortitude and singular dedication to the promotion of the cocoa value chain and his passion to drive the cocoa value chain agenda.
She said their goal was to foster the general knowledge of the different uses of cocoa and to encourage local consumption of cocoa products.
“GEPA is poised to provide all the necessary facilitation to Ghanaian exporters and persons who are interested in venturing into the export business with maximum support possible,” she said.
Mr Hebert Krapa, a Deputy Minister of Trade and Industry, commended GEPA and the Foundation for their ongoing partnership and determination to promote the industrialization agenda of Government with particular focus on the cocoa sector.
He said the Cocoa Research Institute of Ghana (CRIG) had been undertaking some important research into value addition in the cocoa sector for the last few decades and they required all support to maximize benefits from the sector.
The Minister said through the very good work that the Ministry of Food and Agriculture was doing in the cocoa sector through Cocoa Board, production of cocoa had hit the one million metric tonne mark this cocoa season.
He said, “we need to collectively redouble our efforts to quicken the pace of value addition that the President has been emphasizing over the last five years of the NPP Government.”
He said the pandemic could not and should not limit the ability to innovate, even as public sector agencies and with the aid of technology, ‘I know that ACCE21 has an even wider and global reach.’
Mr Krapa said it made a lot of business sense to tap into the benefits brought about by digital technology and GEPA was using this new way of export promotion and encouraged them to do more.
He said the fact that Ghana was hosting the Secretariat of the free trade area puts the country in pole position to derive maximum benefits.
He challenged the next generation of cocoapreneurs to take advantage of the opportunity created by ACCE21 to begin integration into the cocoa processing sector.
The Minister urged GEPA to sustain the event and make it an annual Ghanaian event on the international calendar for Cocoa and Chocolate enthusiasts.
“GEPA can count on my Ministry’s support in the endeavour,” he added.
GNA
- Advertisement -
Share
Facebook
Twitter
Pinterest
WhatsApp
Previous articleMan wins $1M lottery jackpot months after collecting $100,000 prize
Next articleGFA Unveils Milovan Rajevac As Black Stars Coach
- Advertisement -