Mahama Is On Course To Curb Corruption! (1) 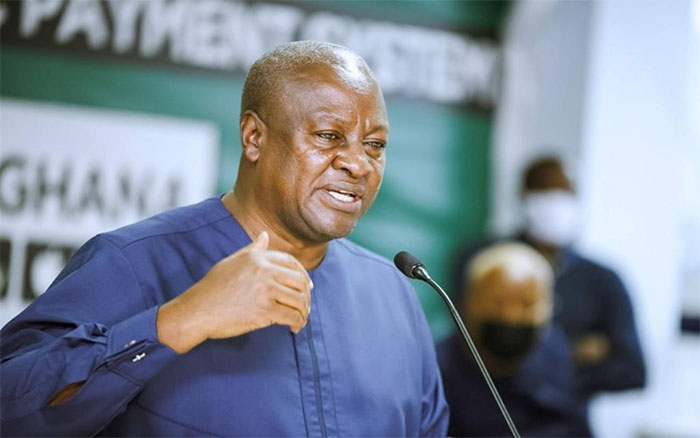 Some of us, to be quite honest, were extremely astonished to listen to His Excellency former President John Dramani Mahama blissfully censuring President Akufo-Addo for allegedly refusing to clamp down on sleazes and corruption.

It is somewhat unfair for anybody to infer that President Akufo-Addo has done nothing at all to curb the canker of corruption since assuming power.

In as much as discerning Ghanaians have every right to grouch and bemoan the lack of prosecutions in the alleged bribery and corruption scandals, it is unfair for anyone to blame Akufo-Addo and side-line the institutions which have the mandate to investigate and prosecute corruption suspects.

It would only take an inveterate propagandist or a disputatious character to suggest somewhat anecdotally that Akufo-Addo is not doing enough towards the insuperable battle against corruption.

President Nana Addo Dankwa Akufo-Addo’s actions and inactions towards the fight against the canker of corruption cannot be underestimated.

How could anyone point a finger at a man who has created the Office of the Special Prosecutor with the view to combating the corrosive effects of corruption?

How would you accuse someone who can even report his own right-hand men to the investigative body such as the Criminal Investigation Department?

In fact, it would be unreasonable for anybody to suggest that a politician who can even reject the juicy trappings of a ministerial post can be corrupt.

We should not lose sight of the fact that the man Akufo-Addo has been in active politics for well over forty years and there hasn’t been a single corruption case against him, either directly or indirectly.

So, why must anybody with a reflective mind think that the septuagenarian president will now indulge in malfeasance?

To be quite honest, it is only the mischievous and the antagonists of Akufo-Addo who would aim to accuse fingers when it comes to corruption.

In fact, the appointment of the Special Prosecutor by His Excellency President Akufo-Addo is a clear manifestation of the president’s unfailing commitment and willingness towards the fight against the corruption menace.

Much as the paradox of exposure is somewhat relevant in the fight against corruption, it is not an isolated tool, it goes hand in hand with prevention and deterrence.

Thus, the creation of the Office of the Special Prosecutor, arguably, remains the single most important accomplishment of President Akufo-Addo’s administration thus far.

I have always insisted that Westerners are not less corrupt than their African counterparts. However, what makes the people elsewhere much more responsible than a Ghanaian and Africans as a whole is the rigidity of the state institutions and the effective laws and regulations.

It is absolutely true that elsewhere, the laws and regulations are strictly enforced, and as such the vast majority of the citizens and denizens prefer the observance to the stringent fines and the harsh punishments.

It must, however, be emphasised that in as much as the followers have a duty of obligation, it is up to the leadership to bring sanity into the system by strictly ensuring that all laws and regulations are enforced without fear or favour.

So to me, the introduction of a Special Prosecutor is a pragmatic way of tackling the rampant bribery and corruption cases head-on.

My dearest readers would bear with me that corruption is a serious economic, social, political, and moral impediment to nation-building, and therefore it is expected that corrupt officials will be held accountable at all times without fear or favour.

Corruption, as a matter of fact and observation, is found in all countries—big and small, rich and poor— but it is in the developing world such as Ghana that its effects are most destructive.

Unfortunately, however, it would appear that in Ghana, the justice system more often than not, descends heavily on the goat, cassava, and plantain thieves, and let go of the remorseless criminals who hide behind the narrow political colorations.

We have, therefore, been hoping somewhat fervently that with the arrival of the Office of the Special Prosecutor, the justice system is going to descend heavily not only on the goat, cassava, and plantain thieves but as well as the hardened criminals who hide behind narrow political colorations.

Indeed, it would be great news if the Special Prosecutor managed to claw back all the embezzled monies in the scandalous corruption cases involving the infamous Bus Branding, SSNIT, Brazil World Cup, GYEEDA, AZONTABA, SADA, MASLOC, SUBAH, the purported $300million debt incurred on the faded STS housing deal, the dubious Embraer 190 Aircraft and hanger for the Ghana Armed Forces and over a US$100 million oil revenue loss between 2011 and 2013 as reported by the Public Interest& Accountability Committee.

Let us admit though, the benign and somewhat lenient approach towards the fight against the canker of corruption would not curb the widespread sleazes and corruption which have been retrogressing Ghana’s advancement thus far.

How on earth would individuals turn away from their crimes if the only available punishment for stealing the public funds is a mere plea to return the loot?

If we are ever prepared to beseech the fantastically corrupt public officials to only return their loots without any further punishment, we might as well treat the goat, plantain, and cassava thieves the same. For after all, what is good for the goose is good for the gander.

Some of us, as a matter of principle, cannot comprehend how and why the people we choose to entrust with the national coffers could team up with shifty individuals and steal gargantuan sums of money belonging to the nation without facing any stiff punishment.

In Ghana, in spite of the fact that corruption is a serious economic, social, political, and moral impediment to nation-building, our corrupt officials are bent on siphoning our scarce resources without a second thought.

There is no gainsaying the fact that Ghana’s transgressed and incompliant politicians and other public officials often get away with murder.

Nevertheless, despite the widely held notion that Ghanaian politics is full of extremely corrupt public officials, we have many selfless, morally upright, and forward-thinking politicians like His Excellency President Akufo-Addo in our midst.

Truly, despite the unrepentant critics’ unsubstantiated claims of corruption, some of us are yet to sight, read, or hear a single act of corruption that has ever been levelled against President Akufo-Addo.

On the other hand, there are more alleged bribery and corruption scandals hanging on the neck of Ex-President Mahama than any other president in the history of Ghanaian politics.

A typical example of alleged bribery allegation hanging on the neck of former President Mahama is the furtive gift of a brand new Ford Expedition vehicle worth over $100,000 from the Burkinabe Contractor, Djibril Kanazoe.