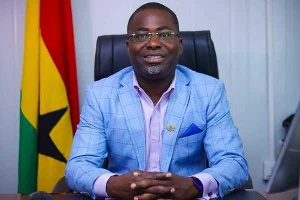 Western Regional Secretary of the New Patriotic Party (NPP), Charles Bissue, has counted claims that the police is covering up a possible kidnapping crime in Takoradi by naming the victim as a suspect, saying opinion-makers must be wary not to throw dust into the eyes of the public.

He said it is apparent to everyone in the country when the three girls were kidnapped in Takoradi and no report was coming out, the police were lampooned by the public but today, the police have released a statement on the alleged kidnapping of a supposed pregnant woman who was freed without her baby.

Mr Bissue said the state agencies such as the National Investigation Bureau (NIB), the police and the hospital in question have been consistent in addressing the public on the alleged kidnapping of Josephine Panyin Mensah.

Mr Bissue emphasized that the victim has the right for an independent examination to ascertain the facts of her claims so it is not right for anyone to polarize the system by creating fear and panic in the country.

He implored the public to leave the police to conduct the investigation into the alleged kidnapping in Takoradi.

Mr Bissue said when the police are wrong the public condemn them and thus pleaded with the police to beef up security in the Western Region.

He said that is how to build a country and not just because one is in opposition thus must attack everything.

Mr Bissue made this call in an interview with Berla Mundi on the New Day show on TV3, Thursday, September 23.

He was commenting on the heels of the statement by the Western Regional Police Command on the alleged kidnapping of Josephine Panyin Mensah and thus naming her as a suspect in her alleged abduction and the claims that the police are covering up a possible kidnapping crime in the Western Region.

“The lady has a right, even though she is a victim she has a right. She has the right for an independent examination so all these avenues are there to explore so let’s not polarize the system and actually cause fear and panic. Let’s rely on the police when they come out, when the police are wrong we attack them. So I sit here and plead with them to beef up security in the Western Region, that is how we build a nation”, he implored on the New Day show.