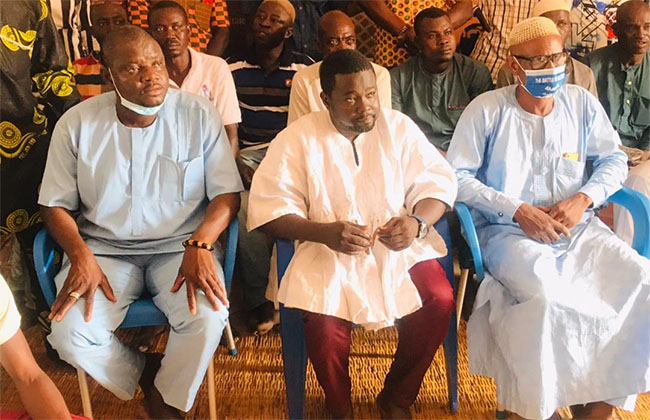 The Presiding Member of the Karaga district assembly, Ziblim Sulemana who addressed journalists on behalf of the assembly members after a brief meeting with the President’s nominee said they believe in the vision of the nominee reason why they decided to endorse his nomination.

“ All the assembly members are ready to work with him and assured him of their confirmation on the confirmation date for us to speedy up with development in the district.”

According to him, the President’s nominee has assured the assembly of continuing with the work left behind by his predecessor to champion the development of the Karaga district and its surroundings.

The Karaga District Chief Executive nominee, Mr. Saani visited the chief of Karaga , Sumani Mahama, opinion leaders and the clergy in the district to seek for their prayers and support to work for the development of the area when confirmed by assembly members.

The President’s nominee indicated that he will work tirelessly to transform the Karaga district when confirmed to demonstrate to the good people of Karaga that the President nominated the right person to stir the affairs of the district.

“ I was born in Karaga here and lived almost all my life here so I know the problems in the district so even though I cannot solve all the problems, I will make sure when I am given the opportunity I will leave a legacy in Karaga district.”

He assured that he would work hand in hand with assembly members , chiefs and opinion leaders in the district for the betterment of the district.

The Chief of Karaga, Sumani Mahama, assured the President’s nominee of their support to enable him to work efficiently for the benefit of the district.

“ We know you already and we are confident that you will do a great job for the Karaga district and we know that you will be a blessing for the district.”

The Chief advised the Karaga DCE nominee to ensure that his doors are always opened to his people irrespective of their political affiliation when confirmed so that they will support him to develop the district.