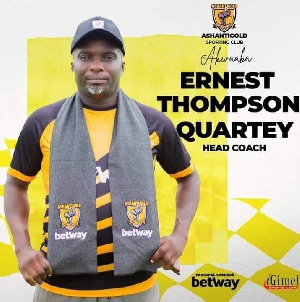 Quartey signed a two-year contract with the Miners in the presence of club President Dr. Kwaku Frimpong and CEO Emmanuel Owusu as we reported few weeks ago.

The CAF License A holder is expected to take charge of the club with immediate effect to begin pre-season training.

AshantiGold finished the 2020/2021 with about five coaches handling the club at some point.

Roberto Landi, Milovan Cirkovic, Romain Folz, Sarfo Castro and Thomas Duah all took charge of the club during the season.

Duah acted as the interim head coach from May till the end of the season as AshantiGold finished 9th position on the league standings.

The Miners also made it to the final of the FA Cup but lost on penalties to giants Hearts of Oak.

Quartey handled Dwarfs from the beginning of the campaign but left the post in June 2021.