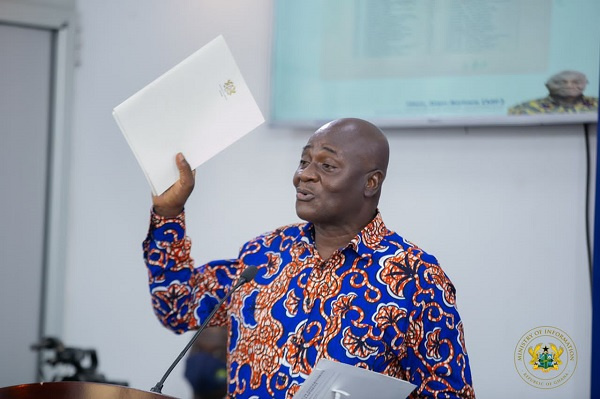 The Local Government Minister, Dan Botwe has called for calm following the announcement of the list of the Metropolitan, Municipal, and District Chief Executives (MMDCEs).

Releasing the list during a press conference on Sunday afternoon, he said the MMDCEs position is service to the nation hence, persons whose preferred choices were not selected should not engage in disturbances.

He explained that“…so far as we are concerned, we are aspiring to serve our motherland and if an opportunity is not given at a particular time to serve, there cannot be any reason whatsoever why there should be disturbances. I think if truly you wanted to serve then there is absolutely no basis for you to be involved in disorderly conduct”

He said the list has been forwarded to the Regional Ministers and the electoral commission for the approval process to begin.

The list contains 260 MMDCEs to head the 260 Metropolitan, Municipal, and District Assemblies (MMDAs) in the 16 political administrative regions of the country.

38 of the number are women with the remaining 222 being men.

The Greater Accra region had 8 women MMDCEs followed by the Eastern and Ashanti regions with five (5) and four (4) respectively.

Mr. Botwe further stated that Regional Directors of the Electoral Commission will on Monday get in touch with the Presiding Members of the various Assemblies and start the process of confirming the President’s nominees.

In the central region, Ernest Arthur was retained as the Cape Coast Metropolitan Chief Executive while Solomon Appiah was nominated for the position in KEEA.

Meanwhile the Public Affairs Director General of the Ghana Police Service, ACP Kwesi Ofori who spoke in an interview Monday and monitored by ATLFMNEWS said the police across the country is on high alert to arrest anyone who flouts the law following the announcement of the MMDCEs nominees.

According to him, the police have mounted check points and are strategically positioned within the district assemblies throughout the country and will not resist to punish anyone who flouts the law due to their disagreement of the nominees.

So far the police have arrested four leaders of the Concerned Youth of Odododiodoo constituency who led a protest on Saturday, 18th September, 2021, due to the President’s decision to appoint Elizabeth Sackey, who is the former Deputy Greater Accra Regional Minister as the next Mayor of Accra.