Manchester City and Liverpool through but Everton out of League Cup 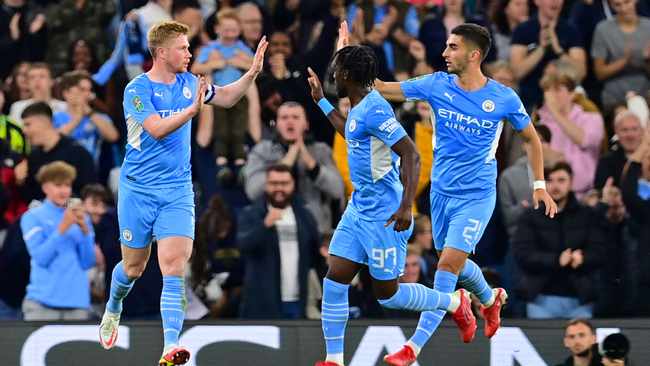 MANCHESTER – Manchester City’s Riyad Mahrez scored twice as the holders moved into the League Cup fourth round with a 6-1 home win over League One (third tier) Wycombe Wanderers on Tuesday.

But with most top flight teams making several changes from the first-choice line-ups, there were Premier League casualties with Everton and Watford knocked out by lower league opponents.

Brandon Hanlan gave Wycombe a shock lead at Manchester City’s Etihad Stadium in the 22nd minute but the hosts took a 3-1 lead by halftime with goals from Kevin De Bruyne, Mahrez and Phil Foden before running away with the game in the second half.

Everton lost 8-7 in a penalty shootout at Queens Park Rangers after their game ended 2-2 following 90 minutes.

Charlie Austin had scored twice for QPR to put them 2-1 up before Andros Townsend’s 47th minute equaliser for Everton.

Top flight Southampton needed penalties to beat Championship side Sheffield United 4-2 after that game ended 2-2 and Leeds United also cut it fine, surviving a shootout at Fulham to triumph 6-5 following a goalless draw.

There is no extra time in the League Cup with ties going straight to penalties if they are drawn after 90 minutes.

The remainder of the third-round ties will be played on Wednesday.