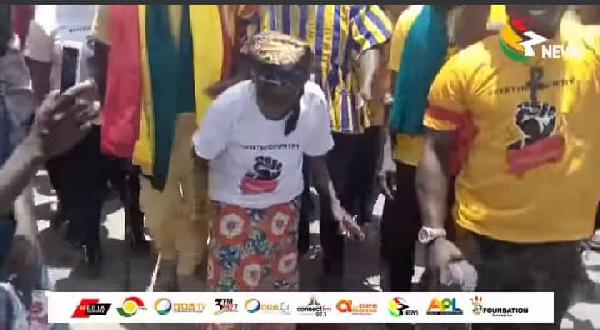 The 90-year-old participated in the demonstration

The first edition of the #FixTheCountry demonstration to be staged outside Accra took place on Tuesday, September 21, 2021, in Takoradi.

The demonstration which called for good governance had among its attendees, a 90-year-old woman who joined the teeming number of youth demanding better living conditions for all Ghanaians.

A video from the event sighted by GhanaWeb shows the old woman draped in a #FixTheCountry shirt and flanked by some of the leading conveners of the campaign singing out loud the ‘Yen Ara Ya Asaase Ni’ national song.

Fix The Country is an advocacy movement that started around March this year. The movement which started on social media developed into a full-blown campaign that saw its first demonstration to drum home their demands, held in Accra on August 4, 2021.

The group has subsequently held its first edition of the demonstration outside Accra with the intention of doing same in other cities across the country.

Meanwhile, versions of the #FixTheCountry demonstration have been held in some countries outside the continent including some staged in Germany, the United Kingdom, Spain and America.